Lady Cavs win All ‘A’ title 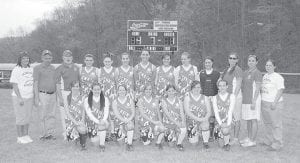 REGIONAL CHAMPS – The Jenkins Lady Cavaliers fast-pitch softball team posed with their coaches and managers after winning the 14th Region All “A” title. (Photo by Chris Anderson)

It is said that offense gets the glory, but defense wins the game. That may be true, but it doesn’t hurt to have an offense that will back its defense by outscoring opponents with a 69-1 margin over the course of four games. That’s what the Lady Cavaliers managed to do last week en route to the school’s first girls’ softball All-A Regional Tournament championship.

In the opening round, the Lady Cavs defeated Riverside Christian Academy 25-0. The next night, they pounded Wolfe County 23-0 and followed that up with a 17-0 shellacking of Lee County before facing Jackson City in the championship game.

In the championship game, the Lady Cavaliers’ offense was slowed to a normal pace by the Jackson City defense, which was effective in limiting in their scoring. The Lady Cavs put a run on the board in the bottom of the first when Emily Walker walked and scored on Rachel Thacker’s fielder’s choice ground out. Brooke Webb added another run to the board in the bottom of the second after blasting a triple and scoring on Kayla Stambaugh’s sacrifice fly. Runs by Hillary Brashear and another by Webb rounded out the Jenkins scoring and were more than enough, as Jenkins pitcher Rachel Thacker limited Jackson City to one run on two hits and one error. Thacker struck out 6.

The Lady Cavs rejoiced in their championship, the first for the school in the All-A Regional Tournament, and look forward to next week in the sectional game against Middlesboro. The game is to be played on the Lady Cavs’ home field at Lakeside in Jenkins.

Following their championship victory, the Lady Cavs returned to regular season play Saturday when they hosted the Hazard Bulldog. Monday they traveled to Knott County for their second district game of the season. The Lady Cavs also faced Pikeville in a home game Tuesday evening.

Leading the charge for Jenkins was pitcher Rachel Thacker, who went 3-3 on the day with a single and 2 doubles and 2 runs scored. Also of note among the plethora of offense for the Lady Cavs are Emily Walker, Brooke Webb, and Tazshia Hall, who had multi-RBI performances. Walker and Webb drove in three runs each while Hall brought 4 runs across the plate with her two hits.

Every Jenkins batter hit safely and most scored at least once in the route of district foe Knott Central. The one exception in scoring was Tazshia Hall, who made up for it with another multi-RBI game, driving in three runs on her fifth inning triple. Brooke Webb also had 3 RBI and a triple and Whitney Gibson went 3-3 with three singles and 2 RBI.

Tekiah Caudill and Lisa Frazier had big games at Knott County, combining to go 7-8 on the day with a total of 6 singles and a triple as the Lady Cougars beat district foe Knott County 19- 3. Hitting safely for the Lady Cougars were Caudill, Frazier, Kayla Burton, Chloe Wynn, Courtney Johnson, and Micca Boggs. Shantayia Kiser, Sierra Kiser, and Katie Mynster each reached base by drawing walks and all LCC hitters scored in the game at least once with Caudill, Burton, Wynn, and Mynster scoring three runs apiece. Pitcher Adiah Cook allowed only one hit while striking out seven in the game.

The Lady Cougars’ three errors in the game nearly doomed them, as they were able to muster a dismal two hits as they squeaked by Powell County for the win in the Tanner Classic Tournament at Powell County. Tekiah Caudill scored on her first at bat of the game, reaching on error and scoring on a Kayla Burton groundout. Micca Boggs walked to start off the second and score on pitcher Adiah Cook’s single. Cook was making a rare offensive appearance in the game, usually having a designated hitter in her place in the lineup. The Cougars’ third run came in the fifth, once again with a leadoff walk and a base hit. This time it was Latisha Potter scoring on Tekiah Caudill’s single. Powell County’s offense threatened in the third, scoring one run and again in the fifth when a LCC error help a runner advance to third before Adiah Cook pitched out of the jam. The Lady Cougars played two more games in the tournament, losing to Johnson Central 6-1 and to Estill County 11-0.

Lisa Frazier once again led Letcher County Central to victory over Leslie County, nearly hitting for the cycle. She lacked a homerun to achieve the feat. To add to her offensive barrage, she scored three runs. Courtney Johnson slapped two doubles in the game and garnered three RBI, while teammate Sierra Kiser chipped in a pair of singles, a run, and an RBI.