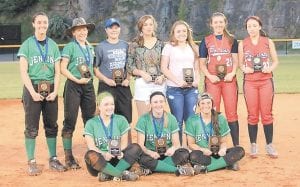 The championship game of the 53rd District Softball Tournament was a pitchers’ duel as the Jenkins Lady Cavaliers and Knott County Central Patriots were nohit through four innings.

In the fifth inning, the Lady Cavs’ Charity Niece led off with a single and Rachel Spangler reached on an error. Both advanced on a fielder’s choice before McKenzie Gibson connected for a second fielder’s choice to score Niece, and Taylor Johnson singled to left to score Spangler. Whitney Creech singled to center to score Johnson and give Jenkins a 3-0 lead.

In the sixth inning Jenkins added a run as Melissa Bartley singled, moved to second on an error and stole third. Rachel Spangler would single to score Bartley and give Jenkins a 4-0 win. Senior pitcher Caitlynn Estevez got the win, holding KCC to only two hits with nine strikeouts.

The first game of the tourney, which was held at Letcher County Central, was a matchup of the number one seeded Jenkins Lady Cavaliers against the fourth seeded Cordia Lady Lions. Sophomore Rachel Spangler pitched a perfect game in her first varsity start. She struck out eight in picking up the 15-0 win.

The Lady Cavs had 15 runs on six hits, with two solo home runs by Whitney Creech and Charity Niece and a grand slam by Lexi Stambaugh.