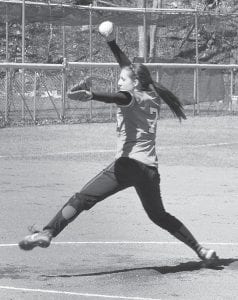 WINDING UP — Jenkins pitcher Kayla Stambaugh prepared to deliver a pitch during her team’s season-opening win over Belfry High School.

The Jenkins Lady Cavaliers softball team opened their season with a 5-0 win over the 15th Region’s Belfry Pirates.

The game started as a pitchers duel as both teams went three up and three down in the first two innings. In the third inning, Belfry got a walk with two outs, but Lady Cavs pitcher Kayla Stambaugh ended the threat with a strikeout.

The Lady Cavs scored in the fifth inning after Melissa Bartley reached base on a single, Ashley Wright got a walk and Bartley stole third on a throwing error by the Belfry pitcher.

Kacey Thakett led off the bottom of the inning with a single for Belfry, but got thrown out trying to steal second by Jenkins catcher Charity Niece. Becca Maynard singled and reached third on an error, but that’s as far as she would get.

In the bottom of the sixth inning, Jenkins broke the game open after Kayla Stambaugh led off with a single, followed by four straight singles four Charity Niece, Mercedes Boggs, Randee Phillips, and Ashley Niece. Alexis Stambaugh pinch ran for Niece and stole second, Belfry’s pitcher got the next three batters on a fielder’s choice and two strikeouts. Still, the Lady Cavs put four on the board to take a 5-0 lead going into the seventh inning.

Kayla Stambaugh took the mound and struck out the first two batters before getting a 4-3 groundout to end the game. She had 13 strikeouts while giving up only two hits and two walks.