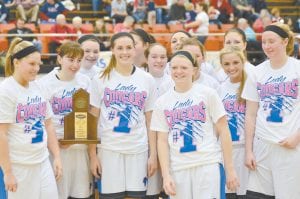 THEY ARE THE CHAMPIONS — Members of the Letcher County Central Lady Cougars were all smiles as they posed with the 53rd District championship trophy. (Photo by Brandon Meyer/B. Meyer Images)

The Letcher County Central Lady Cougars continued their late season surge by beating June Buchanan and Knott County Central to claim last week’s 53rd District championship. With last week’s pair of victories, the Lady Cougars will enter this week’s 14th Region Tournament riding not only a 14-game winning streak, but also occupying the region’s top ranking with a record of 26-5.

After splitting their two regular season games, the Lady Cougars won the game that mattered Feb. 23 in the finals of the 53rd District in Hindman. LCCHS struggled early before rallying behind a strong second-half defensive effort and a sizzling offensive performance to pull away at the end for the victory.

LCCHS rallied in the third quarter by challenging the KCCHS shooters and hitting the boards to claim the lead 38-36 after three quarters. LCCHS took care of the basketball down the stretch, drove to the basket, picked up the foul and cashed in at the charity line to pull away.

For the game, LCCHS converted 22/26 free throws — a percentage that will win a lot of tournament games. The Lady Cougars also out-rebounded the Lady Patriots 28-19.

LCCHS finished with 20/39 field goal attempts for 51 percent, while cooling KCCHS off to 43 percent on 18/42 from the floor.

Paige Slone led the Lady Patriots with 21 points. Reagan King chipped in with 10 points, and Kennedy King finished with eight.

As expected, the Lady Cougars had little trouble with the Lady Crusaders in the semi-finals of the 53rd District Tournament Feb. 20 in Hindman at Knott County Central High School.

LCCHS led 28-13 at the end of the first quarter and extended the margin to 39-14 on Vannah Breeding’s trey with 3:21 left in the first half. Breeding finished with 17 points including four treys.

LCCHS led 44-23 at the break. Kelah Eldridge’s steal and lay-up pushed LCCHS’s lead to 57-28 with 4:07 left in the third quarter. Eldridge, who scored only three points in the first half, finished with a game-high 18.

LCCHS’s lead was 69-32 after three quarters.

For the game, LCCHS made 33/64 field goal attempts, including 5/14 from behind the arc for 58 percent. JBS made 13/39 field goat attempts for 33 percent. LCCHS out-rebounded JBS 38-25, and forced the Lady Crusaders in 15 turnovers while committing only seven.