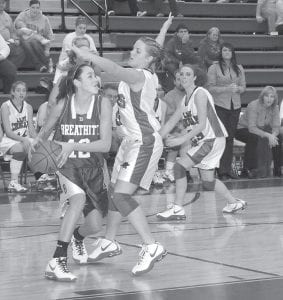 The Lady Cougars take to the road after Christmas for a round robin holiday tournament in Henderson, Tenn. In their first game on Dec. 27, LCCHS meets highly regard Brentwood, Tenn.

BCHS, led by 5-10 freshman guard Kendall Noble, jumped out to an early 7-2 lead over a very nervous and tight Lady Cougars squad. Noble, the pre-season coaches’ choice as the top returning player in the region, scored six of her team’s first eight points and then basically disappeared offensively until crunch time.

With her team up 39-33 with 5:58 left to play, coach Peggy Moore put the ball in Noble’s hands and she made seven-ofeight free throws down the stretch to hold off LCCHS. Noble also chipped in with a game-high 16 rebounds — 15 coming on the defensive boards.

“Facing the two-time defending regional champs, I thought we were nervous to start with and it was evident in the locker room,” said coach Dickie Adams. “Breathitt has a way of making you play bad. They force a turnover and then punish you by running out and scoring. We made some mistakes and they punished us but our defense also punished them and we had a chance.”

BCHS, with three starters back with Sweet Sixteen experience, showed poise in the face of the Lady Cougars’ grit and determination. However, in the end, all LCCHS’s hustle and effort could not stick the ball in the hole. To illustrate its field goal futility, LCCHS made just 14-of- 71 field goal attempts for 20 percent.

“If you had told me before this game,” said coach Adams, “that three of my starters would shoot just three-of-31, I would have said to you that we got drilled and, as you could tell, despite our poor shooting, we had a chance to win.”

The teams were tied at 8-8 at the end of the opening quarter. Freshman guard Haley Whitaker’s short jumper tied the game for the last time at 14-14 with 5:10 left in the first half.

A 14th Region All-Tournament selection two years ago, Tierra Baker, a 5-9 senior guard/ forward, returned to the court for the first time since March 2006, and immediately provided an emotional lift. Alas, Baker, who played extremely hard but awkwardly and finished with eight points and five rebounds, showed two years of rust have not yet been polished off by two months of practice.

With BCHS ahead 43-35 with 5:58 remaining, 5-10 senior forward Brittany Haddix and 6-1 junior center Eden Keeton fouled out within seconds of each other and LCCHS made a final determined effort — cutting an eightpoint deficit to 48-43 on backto back treys by eighth-grader Kelah Eldridge with 1:58 left. Junior Brittany Sexton’s rebound basket cut BCHS’s lead to 48-45 with 1:20 remaining but the Lady Cougars could not get another basket to drop in four attempts in the final minute.

“We only start one senior and a junior and we could really use Tierra Baker’s toughness and experience,” said coach Adams. “When playing a team as experienced and physical as Breathitt County, you have to be able to match that experience.”

With the shots not falling, LCCHS hammered BCHS on the offensive boards — out rebounding a taller BCHS team 28-4 and out-rebounding BCHS 49-39 overall.

“The reality of this game — certainly Breathitt County was bigger and stronger and their physicality bothered us — I didn’t know how our team would respond to their physical defense and experience. Now I know and we can make some changes and get better,” said Adams.

“We’ll keep playing and stick to our guns and we’ll calm down and get the ball to the right spots in the future and we’ll be fine.”

The visiting Lady Cougars ran their record to 4-0 with an easy win over Belfry on Dec. 11.

LCCHS jumped to a 15-9 lead by the end of the opening quarter and then expanded the margin 36-15 by the break and 59- 20 after three quarters.

“Our defense worked really hard in this game, “said coach Dickie Adams. “Our offense was really kind of ragged early with lots of turnovers. We missed passes and didn’t get the ball to the right spots but our defense was very good.”

“It was nice to see Begley and Wynn play really well for us,” said coach Adams.