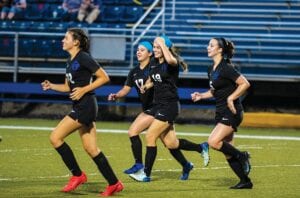 Letcher County Central Lady Cougars footballers Kelsey Goins, Angelina Acevedo, Ruby Miranda and Brooke Bates ran off the field after Miranda capped a 10-0 rout of Hazard last Thursday with a goal in the final seconds of the game. Also in the match, three Lady Cougars — Brooke Bates, Rylee Lewis and Kylee Bates — scored three goals apiece. The season opener against Hazard was played on Miranda’s birthday and her teammates sang to her after sealing the win. After defeating Perry County Central on September 12, the Lady Cougars were 2-0 entering play at Belfry Tuesday. (Photo by Chris Anderson)