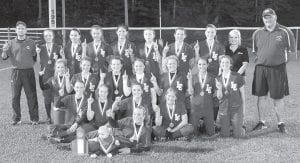 The Letcher County Central Lady Cougars posed with their coaches and a special fan after defeating Jenkins for the 53rd District fast pitch softball championship. LCC went on to win the first game of the regional.

The Lady Cougars, who are coached by Jay Perkins and have only one senior on their roster (alldistrict performer Annie Boggs), advanced to the regional tourney by defeating perennial-power Jenkins in the championship of the 53rd District tournament.

The tournament took place at Jenkins on May 21. In the first game, Jenkins took on Cordia and picked up the win 15-0 in three innings.

In the championship game, Jenkins and LCC faced off for the fourth time this season. LCC picked up the win, 7-6, in eight innings.

Both teams had nine hits. The difference in the game came down to defense. Jenkins committed five errors in the first three innings while giving up three unearned runs. LCC committed only two errors and the Lady Cavaliers could not take advantage.

Both teams moved on to play in the regional tournament held in Powell County, where Letcher Central won and Jenkins lost 3-0 on Monday to Estill County.