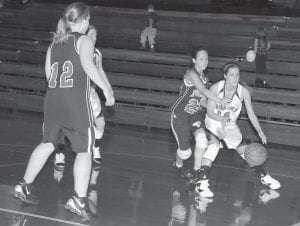 LADY CAVS IMPROVE TO 6-8 — Jenkins Lady Cavs guard Whitney Creech drove for a layup during her team’s 85-58 win over Phelps on Monday. Creech scored 15 points in the game. (Photo by Chris Anderson)

The Letcher County Lady Cougars, who did not have any scheduled games following last week’s costly Jan. 10 victory at Pike County Central, managed to rescheduled their Jan. 8 matchup with Leslie County in Hyden this past Sunday afternoon — winning in overtime to raise their record to 8-6.

LCCHS suffered a major blow when sophomore guard and leading scorer Kelah Eldridge suffered a torn ACL in the first quarter of the Lady Cougars’ win at Pike County Central. With the loss of Eldridge, probably for the season, coach Dickie Adams’s bench became even thinner.

“If you pick one thing that hurt worse than anything, it would be our depth because we’re one front line player away from what we were before. It’s sad; I hate to see kids sidelined for something like that. We’ll just have to make out of it what we can,” said Adams.

The visiting Lady Cougars, with three players scoring in double figures, nailed seven- of- eight pressure-packed free throws in overtime to hold off highly regarded Leslie County this past Sunday afternoon in Hyden.

LCCHS struggled to a 10- 8 advantage at the end of the first quarter and then extended the margin to 22-14 by the half.