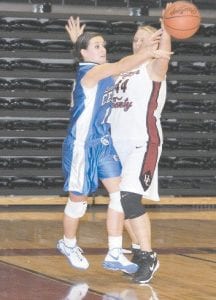 Letcher Central’s Myrika Begley saved an errant pass and got trapped in a corner, but managed to get out of trouble and help the Lady Cougars get past the Harlan County Lady Black Bears. (Photo by Chris Anderson)

The Letcher County Central Lady Cougars were not the most hospitable of visitors Monday evening when they edged newly consolidated Harlan County High School 51-46 to initiate the Lady Black Bears’ inaugural season.

This was a tough first-game match-up on the road for the Lady Cougars and it was by design, according to LCCHS coach Dickie Adams.

“It’s good to play against good teams early because these match-ups give you an idea of how far your team still needs to improve. We’ve got some other tough games coming up this first month against Perry County Central, Leslie County, Knott County, Breathitt County and don’t forget Phelps in our home opener this Thursday night.”

The Lady Cougars, behind the perimeter scoring of junior guard Brittany Sexton and freshman substitute guard Erica Meade, negated the inside size advantage of the Lady Black Bears, according to Adams, and made Harlan County play from behind.

“We played OK for most of the first three quarters,” said coach Adams, “but we didn’t play very good at the end. We had some mistakes like turning the ball over and getting careless with passes and that allowed Harlan County to close the gap.”

The Lady Cougars, despite returning all five starters from last year, start only one senior and a junior and that youth may have contributed to his team’s nervous play at the end, said Adams.

“We didn’t finish plays down the stretch. And, then when we were fouled while shooting, we didn’t finish by making the free throws. Harlan County is a good team and well coached with good talent and size and our youth may have had something to do with our scared play at the end.

“We’ll get better at the end when we have more time to learn to play together as the season goes on.”

Brittany Sexton and Erica Meade led the 1-0 Lady Cougars with 13 points each.

“Erica came in off the bench and played very well,” said Adams. “Her defense was pretty good and her 13 points off the bench was very significant. Brittany is one of our experienced players and we count on her for a lot. She played well on both ends of the court.”

“I know that they have a good coach in coach VanHoose and that he received a couple of Belfry transfers this season. Last year, under coach VanHoose, Phelps had a big turnaround and the 15th Region coaches ranked them in their top five for this year, so we expect a battle.”