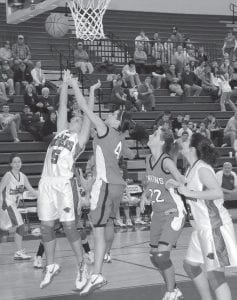 Letcher Central’s Sharaye Kincer sank a shot and drew a foul from Lady Cavalier Heather Revis while Jenkins’s Nicole Revis and Lady Cougar Tierra Baker looked for a rebound. Behind the play are Chloe Wynn and Kayla Stambaugh. (Photo by Chris Anderson)

The Letcher County Central Lady Cougars stretched their current winning streak to seven with victories over Jenkins (Feb. 6) and Perry County Central (Feb. 9) at home sandwiched around a win at Estill County last Saturday afternoon to raise their overall record to 19-4.

With just four regular season games remaining, LCCHS coach Dickie Adams admitted overall he is pleased with his team’s development to date. “I’m not really happy that our two in-state losses are both to regional rival Breathitt County, but I am happy that we competed twice (in losing) to the two-time defending regional champions.”

The other two LCCHS losses this season were in a holiday tournament back in December to a pair of highly ranked teams in Tennessee.

“Our record is fine,” said coach Adams, “and I do have to admit that I’m pleasantly surprised by how quickly we developed and began playing together this season. I knew we had some good talent coming back who gained valuable experience last year, but two of our biggest surprises have been the development of Kelah (Eldridge) and Tierra (Baker). The way (eighth-grader) Kelah has developed and been able to play at the varsity level was a big surprise. I didn’t really expect her to be able to compete at the level she has. The other surprise has been the return of (senior) Tierra who quit playing after the 2007 season. She basically missed last year and the last two summers. Her return could have been destructive but it has not. She’s done a real good job blending in with the other girls and giving us valuable playing time off the bench.”

“It is absolutely important that we win these final games because you always want to be playing well at the end of the season. Besides, Knott County beat us three times last year,” said Adams.

The Lady Cougars’ final home game will be against Wolfe County on Feb. 16, and the season finale will be at rugged Pike County Central on Feb. 20, a team that beat Knott County Central recently.

The girls’ 53rd District tournament will begin on Feb. 23 at Knott County Central. Hazard hosts this year’s regional tournament which begins the first week of March. The girls’ Sweet Sixteen will be hosted again by Western Kentucky University.

Revenge is sweet and the Lady Cougars, led by the duo of Brittany Sexton and Tierra Baker, jumped on the visiting Lady Commodores early and never let up in beating Perry County Central for the first time since 2004.

Back-to-back treys by Sexton to open the game and Haley Whitaker’s 10- foot runner gave LCCHS an 8-0 lead in the first two minutes. Baker came in off the bench midway of the opening quarter and her steal and lay-up pushed the Lady Cougars’ lead to 15-4 at the 2:14 mark. LCCHS led 21-8 at the end of the first quarter.

LCCHS’s half-court defensive pressure handcuffed the Lady ‘Dores into 26 percent shooting in the first half as the Lady Cougars expanded their lead to 35-13 at the half. LCCHS led 56-18 after three quarters.

“I thought we played very well at times,” said coach Adams. “We had good defensive pressure on them in the second and third quarters. Erica Meade shut down their leading scorer (D.J. Shepherd was limited to just two points). We were very aggressive.”

Despite PCCHS’s 8-15 record this year, coach Adams said it is always nice to beat them. “The road to the Sweet Sixteen seems to have always been through them and even though they’re down this year, they’re still PCCHS.”

Sexton hit a pair of treys early and another field goal to push LCCHS to a comfortable 24-11 lead by the end of the first quarter. Sexton, who had four of LCCHS’s eight treys, finished with a game-high 18 points.

LCCHS, with junior forward Shannon Bays and freshman guard Haley Whitaker picking up the scoring slack, led 39-23 at the break and 53-35 after three quarters and then broke the game open down the stretch.

The Lady Cougars had little trouble with Jenkins last Friday night. With 10 players breaking into the scoring column, LCCHS defeated Jenkins for the third time this season.

LCCHS led 21-1 after the opening quarter and then cruised the rest of the way. The Lady Cougars led 37-6 at the half and 56-21 after three quarters.