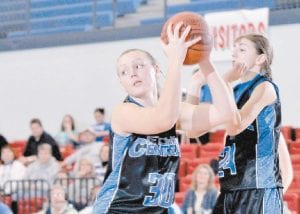 Letcher County Central’s Shannon Bays (30) grabbed a rebound during the Lady Cougars’ 52-49 win over Montgomery County during the Joe B. Hall Classic tournament in Mt. Sterling on Saturday. No. 24 is Kelah Eldridge. (Photo by Mike Hanson/sycamorephotography.ifp3.com)

Coach Dickie Adams said his players are just beginning to realize how good they can be if they’re willing to work hard each and every game.

With the win at JBS, the Lady Cougars remained unbeaten at 4-0 in the 53rd district. But, just as importantly, with their win in Mt. Sterling last Saturday over the five-time defending 10th champions, the Montgomery County Lady Indians, the Lady Cougars proved they can beat good teams on the road. Montgomery County, 9-8, continues to be the top-ranked team in the 10th region.

LCCHS, ranked 24th in this week’s Lexington Herald-Leader poll, is top-ranked here in the 14th region and will have a chance these next two weeks to prove their superiority against the three teams ranked right below them.

“We’ve played a lot of road games and played some good teams like Montgomery County, Franklin County, Ballard and Somerset,: said coach Adams, “but the proof of whether we’re going to be a good team is how we play here in our region and our district. I’m excited about our schedule over these next eight days against the best teams in our region and I think our girls are ready to compete and to see how they’ll fare against other good teams in our region.”

The Lady Cougars used balanced scoring and some second half intensive half-court defensive pressure to win at Montgomery County this past Saturday night.

“Montgomery has good, big athletic girls but we played a pretty good basketball game,” said coach Adams. “We had five girls scoring seven or more points and that balance is what we’ve had all year. Kelah (Eldridge) is our leading scorer but Brittany (Sexton) and Shannon (Bays) are certainly not far behind.”

Eldridge had a game-high 14 points while Sexton and Bays finished with 10 points each. Haley Whitaker and Erica Meade added seven points each while Julie Cornett scored four points.

LCCHS’ defensive pressure in the first half allowed the Lady Cougars to lead 13-11 after the opening quarter and 29-23 at the half.

LCCHS’ third quarter turnovers gave Montgomery County some easy baskets that allowed the Lady Indians to claim a 38-37 lead but, down the stretch, the Lady Cougars defense proved the difference, said coach Adams.

“We turned it over more than I wanted them to but, defensively in half court, we probably played about as well as we’ve played this year. They threw over our defense and scored some easy baskets off our turnovers but they scored very little against us in half-court. That was a real good win for us.”

After beating JBS 78-60 at home on Dec. 23, the Lady Crusaders fared little better in last week’s rematch at Pippa Passes.

LCCHS’ early defensive pressure forced numerous turnovers that resulted in easy baskets which allowed the Lady Cougars to take control early. LCCHS led 14-2 after the first quarter and 38-17 at the half. In the third quarter, JBS rallied but still trailed 49-32 heading into the final quarter.