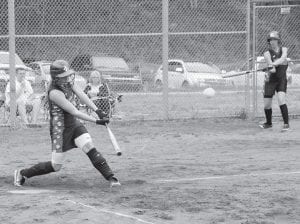 WHO HIT IT? The softball leaving the bat of Letcher County Central’s Lisa Frazier appears in this photo like it could have been struck by the on-deck hitter. The ball landed for a double in the first inning of the Lady Cougars’ game against Jenkins last week. (Photo by Chris Anderson)

First on the agenda was traveling to Harlan Independent. LCCHS started off fast, getting a double by sophomore Chloe Wynn and a walk by senior Takiah Caudill. Sophomore Lisa Frazier stepped to the plate and ripped the ball deep over the left field fence to give the Lady Cougars an early 3-0 lead.

In the third inning Lady Cougars bats lit up the park. Lisa Frazier got things started with a single. The next three batters, senior Courtney Johnson, freshman Amelia Shepherd, and senior Kayla Burton, all walked. Then junior Latisha Potter got on base with an error and junior Katey Mynster scored a run with a RBI single.

Harlan finally got on the board in the bottom of the third with a base hit, an error and sacrifice fly. The Lady Cougars scored one in the fourth with a walk by Mynster and then she scored by a sacrifice fly from Frazier for her sixth RBI of the game.

In the top of the sixth, the Lady Cougars scored five more runs. M. Boggs got a single in to left field and Shepherd got on base when a pitch hit her. Sophomore Annie Boggs hit a double, knocking in M. Boggs, then Mynster got a single sending Shepherd and A. Boggs in to score. Wynn doubled in Mynster and then scored on a pass ball to give the Lady Cougars a 19 to 1 lead. Harlan could not score and the game ended in the bottom of the fifth.

Back on the field April 28, the Lady Cougars hosted Leslie County. LCCHS found itself down early by giving up two singles and a double steal; the Lady Eagles got two runs by a single from Baker.

Leslie County’s pitcher started off rocky when she hit Adiah Cook and then walked Takiah Caudill and Lisa Frazier to load the bases. Micca Boggs ripped a single into center field, scoring Cook and Caudill. Next, Amellia Shepherd singled in Frazier and Boggs came into score on a pass ball to take a 4-2 lead.

In the top of the fourth, the Lady Cougars had a defense meltdown, giving up five runs off one hit and three errors. Down 4-7, LCCHS got the bats going again. Johnson got a nice hit to center and scored when Shepherd, Annie Boggs and Mynster were walked. Cook singled in Shepherd. Boggs scored on a pass ball by the catcher and Frazier singled home Mynster to regain the lead 8-7.

It looked like the Lady Cougars were going to be in trouble again with the Lady Eagles having two runners in scoring position and no outs. Kayla Burton picked off Lady Eagle Frazier at third and Cook got the next two batters to ground out.

In the bottom of the fifth, LCCHS scored three more times with Frazier, Micca Boggs and Johnson getting hits and Shepherd’s sacrifice fly to extend the lead to 11-7.

Each team scored a run in the sixth. The Lady Cougars held the Lady Eagles in the top of the seventh to win 12-8.

LCCHS finished the week off traveling to Belfry on Friday. After a scoreless first inning, Amelia Shepherd got things rolling with a double. Carlina Gose came in to pinch run. Gose moved to third on a pass ball and scored on a Burton sacrifice fly to right field to take a 1-0 lead.

The top of the third, Takiah Caudill started things off with a walk and moved to second when Lisa Frazier walked. Courtney Johnson knocked Caudill home with a blooper single to right. The inning ended when Frazier was picked off at third.

The Cougars got two more runs on Belfry errors when Shepherd walked and then scored when Kayla Burton hit a hard shot through the shortstop’s legs and the ball went to the fence. Both Shepherd and Burton scored to extend the lead 4-0.

The score remained the same until the bottom of the sixth when Belfry finally got on the board. With two outs Branham hit a single and came in to score on a Hatfield double. The next batter, Brittany Branham, hit a single to left field that got by Lisa Frazier, allowing Hatfield to score and Branham to reach third. Cook got the next batter to pop out to end the inning.

In the bottom of the seventh, Cook got the first batter to ground out and then got the next to two to pop out to preserve the win 4-2. LCCHS improves its overall record to 13-3 and is 3-1 in district play.

The Lady Cougars travel this week to Jenkins on Wednesday, host Cordia Thursday, and go to Hazard for a tournament on Friday and Saturday.