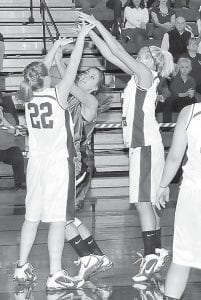 “This was a big win for us,” said coach Dickie Adams, “no question about it. We struggled in the first half because they put a lot of pressure on us. They’re a very physical team and they got us into some foul trouble and we had to depend on some others. Julie (Cornett), Lauren (Thomas) and Vannah (Breeding) came in and did what we wanted and gave us some good minutes.

“Kelah (Eldridge) did a really good job going to the basket. She had a great off ensive game.”

The slow-starting Lady Cougars trailed 14-4 at the 3:40 mark of the opening quarter after KCCHS’s senior Sammy King’s second trey.

Eldridge, who had seven points in the first quarter, hit a turnaround in heavy traffic to cut KCCHS’s lead to 18-15 heading into the second quarter. Eldridge’s 18-footer at the 4:50 mark of the second quarter tied the game at 20-20. A couple of rebound stickbacks by senior forward Shannon Bays pushed LCCHS in front for good and Eldridge’s second trey, her 16th point of the first half, extended LCCHS’s lead to 33-24 with 2:09 left in the first half.

However, with a pair of treys by King, KCCHS battled back to trail just 34-30 at the half.

Freshman guard Paige Slone, who struggled in the first half with seven turnovers and only four points, caught fire in the second half. Slone’s trey, midway of the third quarter, cut LCCHS’s lead to 37-36. Slone scored all 12 of the Lady Patriots’ third quarter points and her Lady Patriots trailed just 47-42 entering the final quarter.

The Lady Patriots went into a near four-minute scoring drought to start the final quarter and after Shannon Bays, who struggled with foul problems, re-entered the game and hit a lay-up, LCCHS’s lead was 53-42 with 4:21 left to play. However, Bays quickly picked up her fifth foul and the Lady Cougars then struggled to rebound, which allowed KCCHS to close to within 56-52 on King’s pair of free throws with 2:20 left to play.

Down the stretch, Eldridge stepped to the foul line and made seven-of-eight as LCCHS held on for the victory.

LCCHS shot 49 percent for the game (21/43) while KCCHS shot 41 percent (20/49). The Lady Cougars committed 19 turnovers but claimed 36 rebounds while the Lady Patriots made 17 turnovers and pulled down 31 rebounds.

Sophomore guard Haley Whitaker finished with 11 points while Bays fouled out with 10 points. Erica Meade tossed in five points and Brittany Sexton wound up with two points. Julie Cornett also fouled out after scoring one point.

Paige Slone finished with 27 points for the 22-6 Lady Patriots and Sammy King wound up with 13.

Eldridge, Bays and Sexton were named to the All- 53rd District Team along with Slone, King and Shandra Thomas from KCCHS.

The host Lady Cougars struggled early, switched defenses and got a big lift from their bench and 28 points from freshman Kelah Eldridge in easily downing Estill County 67-39 in the opening round of the girls’ 14th Region Tournament Monday evening in Ermine.

The Lady Cougars will now face Breathitt County, a 54-48 winner over Leslie County, in the second game in Friday night’s 6:30 p.m. semi-finals. The Lady ‘Cats are 16-7 and the three-time defending regional champs. LCCHS and Breathitt County split their two regular season games this season.

LCCHS coach Dickie Adams admitted that, despite his best efforts, his players may have been looking past their opener with Estill County. “We tried to keep our girls focused for this opening-round game but I guess some of them must still have been looking ahead to playing Breathitt County Friday night.”

Estill County led the Lady Cougars 11-9 at the end of the first quarter but a steal by freshman Vannah Breeding and her feed to senior Brittany Sexton gave LCCHS a 15-13 lead with 4:51 left in the first half. At this point, coach Adams switched defenses and Estill County, unable to penetrate a zone, was forced to take perimeter shots that didn’t go in.

“They’re quick and we had a hard time containing them off the dribble and keeping them from the basket so we switched to a match-up zone,” said coach Adams.

LCCHS then went on a 9-0 run over the final four minutes of the first half — with Eldridge contributing seven points — to push the advantage to 26-18 by the break.

In the third quarter, LCCHS’s defensive pressure out of its match-up zone forced Estill County into five turnovers and limited it to just 2/14 field goal shooting. While shutting down the Lady Engineers’ off ense, LCCHS broke the game open when it extended its lead to 51-26 heading into the final quarter.

“I thought we had a good contribution tonight from our bench,” said coach Adams. “I thought (freshmen) Colleen Goodsen, Julie Cornett and Vannah Breeding and (junior) Lauren Thomas played very well and they deserve some mention.” Goodsen and Thomas failed to score but the two combined for four rebounds and played good defense. Breeding added five points, four rebounds, two assists and a couple of steals while Cornett added four points and four rebounds.

Eldridge, who may be playing the best of any player in this region right now, finished with a game-high 28 points on 10/18 field goal attempts, including 3/8 from behind the arc. Eldridge also added three rebounds and three assists.

Senior forward Shannon Bays had a solid game, scoring 19 points on 8/10 from the floor and 3/3 from the charity line, and pulled down a game-high seven rebounds.

Haley Whitaker finished with seven points while Brittany Sexton and Rachel Baker wound up with two points each.

Chelsea Alexander led Estill County with 10 points and the Lady Engineers ended their season with a 10-17 record.

Despite field goal shooting (16/55 for 29 percent) as cold as the weather outside, the host Lady Cougars’ mastery of the Lady Crusaders continued in the 53rd District semifinals on Feb. 23 as LCCHS downed JBS 59-45 for its 12th consecutive victory over the Lady Crusaders in the past five years.

“We didn’t play very well and we certainly didn’t shoot the basketball very well but we won and we move on to the championship,” said coach Dickie Adams.

LCCHS led 12-7 after the first quarter. Kelah Eldridge, who had a game-high tying 20 points, hit a trey to extend LCCHS’s lead to 18-9 midway of the second quarter. However, Mariss Hovee, who also finished with 20 points, rallied JBS to just a 24-17 deficit at the half.

Eldridge’s second trey at the 2:54 mark of the third quarter extended LCCHS’s margin to 33-22, but substitute Kayla Short scored her only points of the game (back-to-back baskets) to lead a JBS rally that cut the Lady Cougars’ lead to 36- 27 heading into the final quarter.

The difference in the game was his team’s second half defense, according to coach Adams. “We forced them into some turnovers and then took the ball to the basket and either got to the foul line and made free throws or we kicked it back out to Kalah who made some big shots for us. And, don’t forget our free throw shooting tonight.”

LCCHS’s biggest lead of the second half came with 2:09 left to play after Haley Whitaker converted a oneand one to extend the lead to 47-34.

Late in the fourth quarter, LCCHS went into a delay with its off ense and JBS had to resort to fouling. Haley Whitaker converted nineof 10 from the charity line to finish with 16 points. She also pulled down eight rebounds and had four assists.

With so many missed shots, there were more opportunities for rebounds than points. All-Stater Mariss Hovee, a 6-3 senior, led JBS with a game-high 21 rebounds/20 points while senior All-District forward Shannon Bays led LCCHS with 16 rebounds and 14 points. LCCHS outrebounded JBS 44/41 and forced the Lady Crusaders into 15 turnovers while making just nine.

Kelli Pratt scored eight points for the Lady Crusaders, who finished with a 14-9 record.