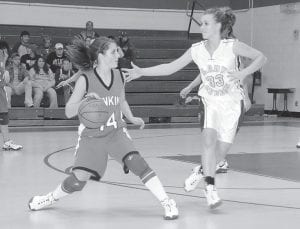 Above, Jenkins Lady Cavalier Kayla Stambaugh looked to move around her defender during her team’s loss to Ervinton, Va., last week. The Lady Cavs fell to 0-2 after that loss. They also loss their seasonopener against South Floyd the night before. Jenkins will host defending district champion Knott Central Thursday.

The Letcher County Central Lady Cougars extended their unbeaten record to 3-0 with a pair of wins last week at home over Phelps and Owsley County.

LCCHS travels to Belfry tomorrow night for a match-up with the Lady Pirates. The oncemighty Belfry program’s struggles continue this year after losing its top two scorers from last year’s 15-14 squad.

The Lady Cougars return home to host defending regional champion Breathitt County on Saturday night in a key early season match-up for regional supremacy. The winner of this match-up should occupy the top spot in the regional standing and be a top-25 team.

After just three games, it is readily apparent that the hallmark of this vastly improved Lady Cougars team is a doubleedged sword — tenacious fullcourt defensive pressure and a veritable abundance of offensive talent that converts offensive opportunities and can and does hit the open shots. 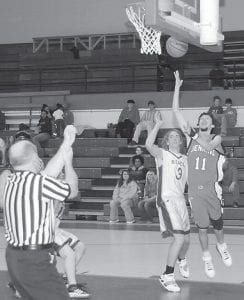 Garrett Stewart drew a foul on a layup during the Jenkins Cavaliers’ 65-49 win over the Ervinton, Va., Rebels. The Cavaliers improved to 1-1 after that win. They lost their opener to Knott County Central, 118-43. Mark Johnson is the team’s new coach. (Photos by Chris Anderson)

Against a good Owsley County team that entered Monday night’s contest unbeaten at 2-0, the Lady Cougars forced the Lady Owls into 19 first half turnovers (29 overall) to expand a 19- 14 early second quarter lead into a 47-23 halftime advantage.

Early in the second quarter, super sub and eighth-grader Kelah Eldridge entered at point guard and over the next three minutes hit five-of-five (including two treys) from the floor to fuel a 15-0 run that gave LCCHS a 38-16 lead with 3:56 left in the first half. Eldridge finished with 14 points.

As hot as Eldridge was in the second quarter, juniors Shannon Bays and Brittany Sexton and senior Sharaye Kincer had been carrying the offense. Bays had a career game with 21 points — eight in the first half. Sexton had 12 points at the half and wound up with 19. Kincer finished with 16 points.

Freshman guard Erica Meade chipped in with four points and another outstanding defensive effort — this time on Owsley County’s junior guard Mikah Turner. Turner finished with 15 points but most of her points came against subs in the second half. The Lady Owls were led by 5-11 freshman Hayden Wright’s game-high 23 points — with 14 coming in the second half after the game was no longer in doubt.

The host Lady Cougars used a strong defensive pressure and some outstanding shooting to easily down visiting Phelps 79- 55 in its season home opener last Thursday night to remain unbeaten at 2-0.

The Lady Cougars’ defensive full-court pressure forced Phelps, now 1-1, into 17 first half turnovers and 28 for the game.

“Our defense, especially in the first half, was good,” said LCCHS coach Dickie Adams. “Our focus in practice early on has been our defense and that’s why it should be ahead of our offense at this time of the year, but I thought we threw the ball to the open player and hit open shots against their zone.

“We’ve improved our guard play this year and our turnovers are way down for our first two games this year over last year. Kelah Eldridge and Brittany Sexton and Erica (Meade) have improved dramatically.”

Freshman Erica Meade came off the bench two minutes into the game and defensively shut down Phelps’ 5’7″ senior guard Marissa Pruitt, the 15th Region coaches’ choice as the top returning player in their region. Pruitt, who averaged 20 points per game last year while playing at Belfry, finished with 16 points — 11 coming in the final five minutes against substitutes.

“Erica Meade just has a perfect build for defense,” said coach Adams. “Erica is willing to work at defense and she could be a very special player in high school. I was also very pleased with her offense.” Meade finished with 11 points.

Junior Brittany Sexton’s second trey gave LCCHS a 12-4 lead. with 1:56 left in the first quarter. Sexton, who made three of four treys, finished with 11 points.

In the second quarter, junior forward Shannon Bays and senior forward Sharaye Kincer took over inside. Bays’s layup with 7:10 left in the first half gave LCCHS a 22-10 and began a 20- 2 run that was capped by eighthgrader Kelah Eldridge’s trey for a 42-12 lead with 2:10 left in the first half. Bays finished with 14 points and a game-high seven rebounds. Eldridge, who came off the bench, made four-of-five treys and also finished with 14 points.

Kincer scored 11 of her gamehigh 19 points in the third quarter and helped the Lady Cougars expand their lead to 63-34 going into the final quarter. Kincer also pulled down five rebounds as LCCHS out-rebounded Phelps 33-31.

“Sharaye (Kincer) just took over,” said coach Adams. “She’s an outstanding rebounder and defender and she manages to score points for us.”