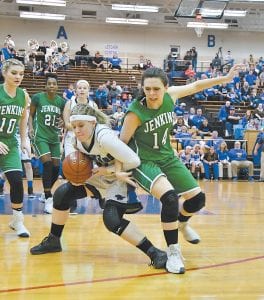 Jenkins’ Kaylee Bentley and Letcher Central’s Shelby Hall fight for the ball in the cross-county rivals’ matchup Tuesday in the 53rd District Tournament at Knott Central. Letcher Central finally pulled away from Jenkins in the fourth quarter, and won 44-34 over the young Lady Cavalier squad. The game was the final district matchup the two will play, as Jenkins moves to the 59th District and the 15th Region next season. 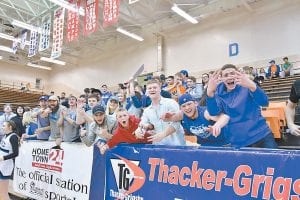 The Letcher Central student section was lively during Tuesday’s winning effort against Cordia in the 53rd District Tournament at Knott Central. (Photos by Chris Anderson)