Lady Cougars to face test from No. 23 Shelby Valley 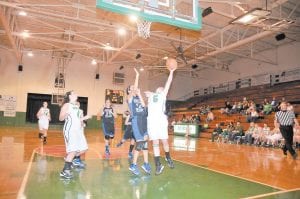 FAST BREAK ENDS WITH A BUCKET — Jenkins High School’s Whitney Creech fired up a shot underneath the basket in the Lady Cavaliers’ loss to Shelby Valley on Monday, 79-41. Creech finished the game with 26 points and was one of only four scorers for Jenkins. (Photo by Chris Anderson)

The Letcher County Central Lady Cougars will take on the No. 23 Shelby Valley Lady Wildcats at 7 p.m. Thursday in the WYMT Classic at Perry County Central in Hazard.

Shelby Valley, now 12-2, tuned up for tomorrow night’s matchup with a 79-41 win at Jenkins on Monday. Letcher Central was expected to easily defeat June Buchanan School on Tuesday night.

The schedule does not get any easier the next week for the Lady Cougars with 15-2 Harlan County visiting on Saturday afternoon, and road trips to Breathitt County on January 18 and to East Jessamine to play Louisville Moore on January 19.

The Lady Cougars could not overcome poor free throw shooting down the stretch and the flu bug in losing to the Lady Patriots in Hindman on January 5. 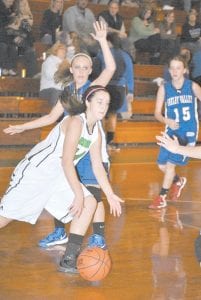 With senior forward Julie Cornett scoring 13 of her game-high 27 points in the first half, LCC closed to within 15-14 by the end of the first quarter, and then pushed in front 26-20 by the half. Eldridge was limited to two firsthalf points and finished with seven points — far below her team-leading 18 points-per-game average.

On a night when someone else needed to pick up the scoring slack for Eldridge, LCC’s bench contributed just five points.

In the third quarter, senior guard Paige Slone’s lay-up pushed Knott Central back in front 33-32 with 3:20 left in the third quarter. LCC answered with a 7-0 run and led 39-33 with two minutes left in the third, but the Lady Patriots rallied for a 40-39 lead heading into the final period. Julie Cornett’s three-point play tied the score at 42-42 with 5:54 left to play, and the game turned into a free throw shooting contest after that with the Lady Patriots converting 10/10 while LCCHS managed just 3/6 — including missing two more in the final seconds and trailing 48-46.

Statistically, the teams battled evenly with each team collecting 24 rebounds and committing 15 turnovers.