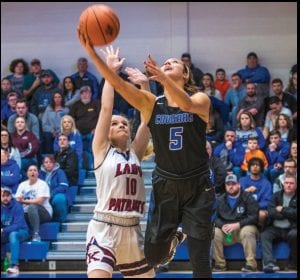 Letcher Central’s Brooke Bates draws a foul while laying the ball up in the title game of the girls’ 53rd District Tourney. LCC continued its dominance over Knott Central in the district tournament, repeating as champs and improving the record between the two teams in district play to 10-4 in favor of LCC. (Photo by Chris Anderson)

Sophomore guard Kaylee Banks scored 20 points and Brooklyn Collins added 15 points to lead the Lady Cougars to the 55 to 41 victory last Thursday at Alice Lloyd College. The win enabled the Lady Cougars (22-10) to advance into the 14th Region Tournament, which they are hosting.

Brooklynn Collins led the team in rebounding with 9. Kaylee Banks and Loren Boggs each pulled down 8 caroms.

LCC opened Tuesday night’s opening-round play at Ermine against the 55th District runner-up Jackson City Lady Tigers (12-17), who fell Wolfe County in their district final, 72 to 39. With a victory Tuesday, the Lady Cougars would advance to second-round play on Friday with an 8:15 p.m. match-up with the winner of the Hazard vs. Estill County game. 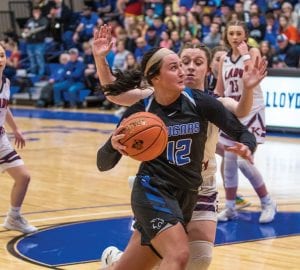