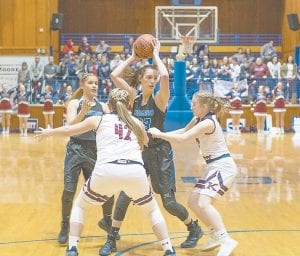 Letcher Central’s Emma Maggard looks to pass while teammate Loren Boggs moves in to assist in Monday’s regional championship game against Knott Central. The Lady Cougars were unable to sustain a 10-point lead going in to the fourth quarter, and fell to the defensive-minded Lady Patriots, 54-49. (Photo by Chris Anderson)

A smothering full-court pressure defense in the fourth quarter helped the Knott County Central Lady Patriots erase a doubledigit lead and go on to defeat the Letcher County Lady Cougars in overtime, 54 to 49, in Monday’s final game of the 14th Region Girls’ Basketball Tournament at Breathitt County High School.

The Lady Patriots will continue their season at noon on March 13, when they open the 2019 KHSAA Girls’ Sweet Sixteen Basketball Tournament at Rupp Arena in Lexington. Knott Central will play the 11th Region champion, either Lexington Henry Clay or Scott County.

In winning the 14th Region, the Lady Patriots avenged a 54 to 46 loss to the Lady Cougars in the final game of the 53rd District Tournament on February 28. Letcher Central then advanced to the region final with a 55 to 40 win over Owsley County last Thursday and a 63 to 54 win over Breathitt County on Saturday.

In the Breathitt game, Emma Maggard scored 10 points in the first quarter to help the Lady Cougars to a 21 to 14 lead by the end of the frame. The Lady Bobcats held Letcher Central to nine points in the second quarter as they came roaring back to take a 31 to 30 lead at halftime. 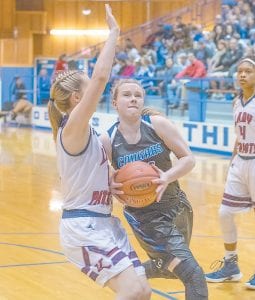 Letcher Central’s Kenzie Craft drives to the goal in Monday’s loss to Knott Central in the championship round of the 14th Region Tournament. Craft scored four points in the game for the Lady Cougars. (Photo by Chris Anderson)

Kaylee Banks scored eight points in the third quarter to help keep the score close going into the last period, 49 to 48 in favor of Breathitt.

In the fourth quarter, Kenzie Craft hit three three-point field goals to lead the Letcher Central offense as it went on a 15 to 5 run to put the game away. Craft had nine points for the game.

Against Owsley County, the Lady Cougars jumped to a 31 to 17 lead by halftime in a game in which they were never seriously threatened.