Landon Sexton and the beanstalk 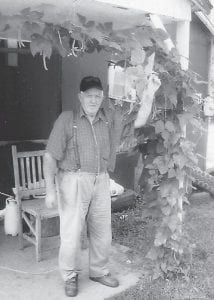 BIG JOHN — Landon Sexton is growing this Big John bean plant at his home at Colson.

This Big John bean was planted by Landon Sexton of Colson near his front porch.

He says, “I started with just two beans. After soaking them in water to see if they would sprout, I laid them down on the ground beside my front porch. When they started to sprout, I covered them with a little soil and watched them grow.

“Never realizing that the plant would grow at a record pace, I made a nylon climbing string to support the bean. The string was six feet high and 10 feet across. I secured it to the top of the porch post and strung it across the porch to the post on the other side. I had to double the bean back across the top string and it has grown another eight feet and continues to grow.

“The yield of the bean has been at least 249 beans and it is still blooming.

“My secret is very simple. I fed it about 1/2 cup Miracle-Gro twice a week and kept it watered so as not to allow it to dry out.”