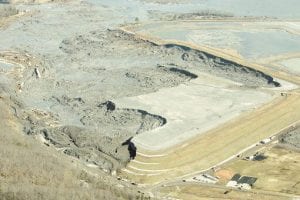 In this image provided by Greenpeace, coal ash slurry left behind in a containment pond near the Tennessee Valley Authority’s Kingston Fossil Plant is shown this week in Harriman, Tenn., after the dyke at left broke Dec. 22, unleashing a billion gallon flood of toxic sludge into the Emory River. (AP Photo/Greenpeace, Wade Payne)

A group of land owners sued the Tennessee Valley Authority for $165 million on Tuesday over a dike burst that spilled more than a billion gallons of coal ash sludge.

The six-page lawsuit was filed in state court by Jot and Brenda Raymond, owners and developers of North Lake Estates in eastern Tennessee’s Roane County.

It claims a creek running through the development has been damaged and is backed up as a result of the Dec. 22 spill from a power plant.

The Raymonds said in the suit that they can’t show prospective buyers their property, which they describe as suffering “significant and immediate damage” to its value.

Also named as plaintiffs are Lea Ann Raymond and Chris Raymond, who own property in the subdivision. The lawsuit doesn’t say if the four plaintiffs are related.

“Normally we respond through the courts,” he said.

The ash sludge from the storage pond at TVA’s Kingston Steam Plant spilled over roughly 300 acres and into the Emory River.

The North Lake Estates subdivision is near but not inside the area that has been closed off because of the ash sludge.

A sign at the development says lot prices start at $20,000. No sludge was apparent from the subdivision road on Tuesday, but the creek at the back of the development wasn’t visible.

“TVA possessed or reasonably should have possessed knowledge and data which indicated the retention pond was subject to collapse or breach,” the lawsuit says.

Attorneys for the plaintiffs didn’t immediately return calls seeking comment on the lawsuit.

TVA, its board of directors, President and CEO Tom Kilgore and other TVA executives are named as defendants. The suit asks for $15 million in compensatory damages and $150 million in punitive damages.

The nonprofit Southern Alliance for Clean Energy said it also notified TVA on Tuesday that it intends to sue under the federal Clean Water Act and the Resource Conservation and Recovery Act.

TVA has said it is investigating what caused the dike to fail and has speculated that cold weather and heavy rainfall were factors.

The deluge destroyed three houses, displaced a dozen families and damaged 42 parcels of land, but there were no serious injuries.

TVA has begun cleaning up the sludge and taking air, soil and water samples because of potentially hazardous materials in the fly ash, the waste from burning coal to produce electricity.

Federal officials have cautioned residents who use private wells or springs to stop drinking the water pending more tests because of high levels of arsenic.

Samples taken near the spill slightly exceed drinking water standards for toxic substances, and arsenic in one sample was higher than the maximum level allowed for drinking water, authorities said.

Officials also are concerned about air quality as the sludge containing the fly ash, a fine powdery material, dries out. The dust can contain metals, including arsenic, that can irritate the skin and aggravate pre-existing conditions like asthma.

A large pile of ash still at the power plant may be covered with mulch or a calcium carbonate spray that would dry like a thin cap of concrete and prevent it from blowing away, Neil Carriker, an environmental official with TVA, said Tuesday.