Large amount of meth found after truck wreck at Dunham 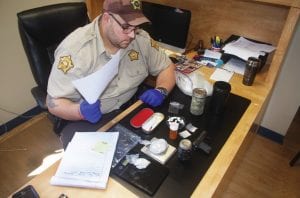 METH CACHE FOUND – Sheriff Mickey Stines looks over evidence collected after he and officers went to investigate a truck sitting in a ditch all night on Dunham Hill. A man was arrested on drug trafficking and firearms charges, and a woman was arrested on warrants from other counties. (Photo by Sam Adams)

William L. Davis, 33, of St. Charles in Hopkins County, was charged Monday afternoon with first-degree trafficking in a controlled substance, first offense, and possession of a firearm by a convicted felon.

Sheriff Mickey Stines said the department received a phone call Monday about a vehicle in a ditch on the mountain. Stines said he retrieved his sideby side from his home at McRoberts and he and Deputy Josh Pease started up the mountain from there, while Jenkins Police Chief Josh Richardson and two firefighters came up the other side of the mountain. He said when he arrived, Davis and a woman were at the truck, and Davis was putting a note on the windshield saying they were going for gas. Davis was carrying a blue backpack.

Stines said Davis kept putting his hands in his pockets and taking them out. When he asked Davis if there was anything illegal in the backpack, Stines said, Davis told him he had “ice” in it. Ice is a street name for methamphetamine.

Stines said Davis was carrying a small, semiautomatic handgun in his pocket, and the backpack contained plastic baggies like those used for selling drugs, two sets of electronic scales, several loose pills including Viagra and Neurontin, a plastic bag containing a substance believed to be meth, and another plastic bag that Davis claimed was a powder used to mix with meth to cut the strength and make it go farther.

Stines said once at the sheriff ’s department, the bags were weighed and officers found the one that Davis acknowledged was meth weighed 59.64 grams, and the other weighed 27.82 grams. There was also a glass container that held an unknown substance, and another container with marijuana, Stines said.

Davis was the only person charged with the meth, however the woman with him, 24-year-old Regina Craft, of Hueysville in Floyd County, was arrested on a bond violation warrant from Perry County and a failure to appear warrant from Floyd County.

Both were placed in the Letcher County Jail.