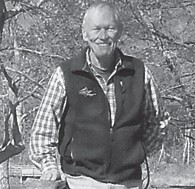 He was the son of the late Dave and Lake Craft of Mayking, and was preceded in death by a brother, David Logan Craft, and two sisters Linda Kay Craft and Anita Fay Craft Minton.

Mr. Craft received his PHD from the University of Kentucky and was a professor there for several years before accepting a job as Vice President at Pepperdine University in California. He moved to Reston, Va., after retiring and started a commercial real estate company, which he later sold and moved to South Carolina with his wife.