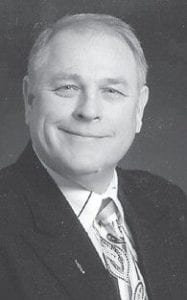 Larry Everidge was sworn in as the newest member of the Whitesburg City Council at its August 11 meeting. He takes the seat formerly held by Perry Fowler, who resigned.

Everidge moved to Whitesburg from Isom several years ago to be closer to his business, Everidge Funeral Home. He and his father, Emmitt, purchased Craft Funeral Home from Durward Banks in 1986 and later also bought Green Acres Cemetery. The funeral home was established in 1936 and has been in business since that time. The cemetery has added a mausoleum and two new burial grounds under Everidge.

Emmitt Everidge began mining coal in the Colson area after returning from military service in World War II. Larry Everidge joined his father and their late partner Leonard Niece at an underground mining operation near Isom after attending Alice Lloyd College and serving in the Army where he was a military po- lice officer in Vietnam. After Niece’s death, Larry Everidge took over daily operations at the mine.

His parents, Emmitt and Juanita Adams Everidge, still live at Colson where they have made their home for more than 60 years.

After the death of his son Kevin in 1990, Larry Everidge worked in his role as funeral director to identify with other parents who had lost teenage children. He became involved in civic club activities and school programs in the county. He also served as deputy coroner and on various board and committees and as a deacon at First Baptist Church.

He says he is very interested in the future of Whitesburg, seeing how much the current administration is accomplishing and knowing how difficult is the task. He says he was very pleased and honored to be asked to fill the appointment to the city council.

Everidge said the regional and local economy is so closely tied to the coal industry and the future health reform, that we must attempt to take advantage of the new coal technology and the medical services potential already available. Coal-fired power plants and the mining of coal itself have come under fire, he said, and we must proceed with care to ensure our chief livelihood is protected during its transformation into the 21st century and that these jobs are available to the next generation of miners.