Larry Hagman’s J.R. Ewing was TV villain for all ages 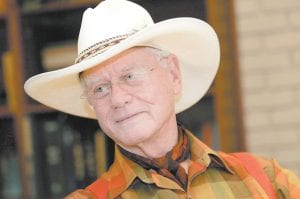 Thanks to Larry Hagman, J.R. Ewing is forever. (AP photo)

One reason “Dallas” became a cultural phenomenon like none other is that Larry Hagman never took its magnitude for granted.

During an interview last June, he spoke of returning to Dallas and the reallife Southfork Ranch some months earlier to resume his role of J.R. Ewing for the TNT network’s revival of the series. There at Southfork, now a major tourist attraction, he came upon a wallsize family tree diagramming the entanglement of “Dallas” characters.

In its own way, the original “Dallas” — which aired on CBS from 1978 to 1991 — was unfathomably bigger than anything on TV before or since, while J.R. Ewing remains unrivaled not just as a video villain but as a towering mythical figure.

All this is largely thanks to Hagman and his epic portrayal of J.R., a Texas oilman and patriarch who, in Hagman’s hands, was in equal measures loathsome and lovable.

Hagman, who died November 23 at 81, certainly had nothing more to prove a quarter-century ago when “Dallas” ended after 14 seasons.

But in the series revival, whose first season aired this summer, J.R. was even more evil and deliciously conniving than ever. Though visibly frail, Hagman knew how to leverage J.R.’s vulnerabilities as a new form of strength to wield against his rivals. Hagman knew how to doubledown on J.R. as a force the audience could hiss and cheer with equal delight.

Of course, in his long career, Hagman did more than star in “Dallas” and tackled more roles than J.R. Ewing. Had “Dallas” never come along with its operatic sprawl of power, corruption and family feuds, Hagman would likely be remembered for an earlier series, “I Dream of Jeannie,” the 1960s sitcom about an astronaut and the genie who loved him.

Even so, during Hagman’s five seasons co-starring with Barbara Eden as the sexy genie-in-a-bottle, he was inevitably upstaged.

That would never be a problem on “Dallas,” especially after the final hour of the series’ second season, when J.R. was gunned down by an unknown assailant and left for dead on his offi ce floor.

All that summer and late into the fall, the nation was seized and teased by the mystery of Who Shot J.R.? Nearly every fellow character had sufficient motive to want J.R. killed, and which of them had done the deed was a question everyone was asking. Finally, the answer was delivered on the episode that aired 32 years ago almost to the day — on Nov. 21, 1980 — when the shooter was revealed to be J.R.’s scheming sister-in-law and mistress, Kristin.

As J.R., Hagman could marshal piercing glances with his hawk-like eyes, and chill any onlooker with his wicked grin. There was no depth to which J.R. couldn’t sink, especially with the outrageous story lines the series blessed him with.

But his popularity exceeded that for even a notable bad guy. This, too, is a credit to Hagman’s portrayal. By all indications, the glorious rascalness that made J.R. such fun to watch was lifted intact from Hagman’s own lively personality.

“He walks in, this man with a cowboy hat,” said Gray, “and I thought, ‘What’s this?’ To me, he was still the astronaut from ‘I Dream of Jeannie.’ Then he looked at me and he went, ‘Hello, darlin’.’ And that was it: I thought, Oh, darn, this is gonna be fun.”

“She THREW herself at me!” Hagman broke in. “She’d had a couple of glasses of champagne already, and she put her arms around me and said, ‘I’m your WIFE!’”

“Where do you come up with these stories?” Gray, laughing, fired back at the man she would describe at his passing months later as “my best friend for 35 years.”

What made J.R. irresistible, and always forgivable, was his high-spiritedness, his love of the game. Despite the legendary fortune of the Ewings, J.R. didn’t flaunt his wealth. (Southfork was comfortable all right, but not ostentatious. If you wanted to see a primetime soap whose characters threw their money around, you switched over to ABC and watched “Dynasty.”) J.R. savored power, not things. He loved doing to others before they did it to him, and he usually succeeded.

Operating with such diabolical zest, J.R. appalled viewers, yet they always rooted for him. And relied on him to prevail. Back in 1980, they played an obsessive guessing game of Who Shot J.R.? But no one for a moment imagined he would die.

This makes Hagman’s passing difficult for fans to comprehend. And it raises an obvious question: During the new season of TNT’s “Dallas,” which begins Jan. 28, will J.R. have to die?

On some level, his fate seems unavoidable. But for viewers who have hateloved J. R. for decades, there’s a different answer: Thanks to Larry Hagman, J.R. is forever.