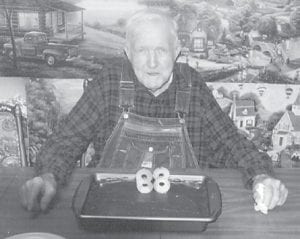 Hello everyone, hope everything’s going well for all of you.

My son Larry is recovering from his birthday on the 10th. Do you think he is looking older? If you do, don’t tell him. He’s a good old boy anyway.

I enjoyed talking to Velma Slone recently. She called to ask about my sister Louise. Louise went to the Smokies with her friend Annetta Dingus for a few days and got sick and had to come home and go to the doctor. They sent her to Lexington Central Baptist Hospital and she’s still there. It’s been three days.

I’m sure she’s homesick. She’s been away for eight days and we’ve missed her.

Cram Creek Church has been having its Homecoming this week, and it’s been going real well and having lots of people coming.

My sister Joann Brown and husband Don came in for a surprise visit and ended up spending time in the hospital. I’m sure glad they were here. She had to get back to Indianapolis for her job. It was good seeing her. 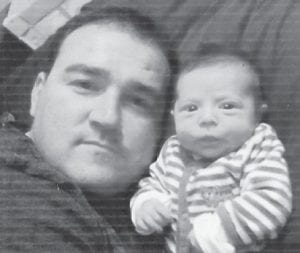 Whitesburg correspondent Oma Hatton’s grandson, Dr. Jonathan ‘Jump’ Hatton, is pictured with his five-dayold son, John Luke. He and his wife, Andrea, also have a daughter, Kate. The couple live in Pikeville and both work at Pikeville Hospital, where she is registered nurse.

Late happy birthday to Komas Ison on his 88th birthday. He was one of my husband Clyde’s best friends and hunting buddy.

I called my cousin Ruby Jean Howard and she seemed to be doing pretty well. She has some health problems, but she’s taking care of herself.

She said our other cousins, Brenda and Dexter Howard, were doing pretty well. They have been in poor health for a long time, but they are hanging in there. It’s what you have to do. I wish they lived closer; they live in Garrett, Ind.

Dexter is our double first cousin. Our mothers were sisters and our dads were brothers.

Bro. David Miller of Dayton, Oh., will be at our church from Oct. 14 to 18. We are really looking forward to it. He’s not only a great preacher and singer, he’s a good friend to all of us.

I had a nice visit with my son Billy and wife Sandra and some delicious food. I don’t think it’s fair for daughter-in-law to be a better cook than her mother-inlaw. Don’t tell her I said she is a great cook!

Three great-grandmothers, how about that!

Her son was there to see the baby also. I think his name was John Barker. I had only met him once before during a birthday party for Andrea.

He reads The Mountain Eagle and wanted to know who were the Marlowe boys. Now, he knows Marlowe was once a large coalmining camp with lots of houses and lot of people then. The houses are all gone and most of the people are no longer with us except in our memories of the good times.

I try to keep in touch with most of those who are left and love hearing about all of them. I’m glad to be living where I can see where Marlowe used to be.

Dan Combs owns the only two houses left, and I can see them from my house.

My sister Louise got home from the hospital Sunday. I haven’t had a chance to see her yet, but I talked to her on the phone.

Cram Creek Church had its Homecoming dinner last Sunday, and I’m sure they had lots of good food and a large crowd, and some good preaching.

I sure enjoyed Sunday School this past week. Bro. Rodney Allen taught so well! We really appreciate him and our other teachers and preachers. We have a good church and I love it.

When I called Louise she said she was tired and was going to sleep. She says she can’t eat, and that’s not good.

She needs everyone’s prayers, as do all the other people who are sick: Sonia Fields, Steve Taylor and Shirley Nice, and Hazel Hart. I hope all of the sick get better.

May God bless all of you, and try to be in church somewhere if you are able. God loves you!