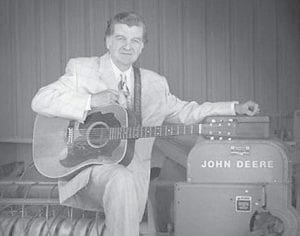 TO PERFORM – Larry Sparks will perform at the Appalshop in Whitesburg on Thursday, Dec. 6.

Larry Sparks, one of the legendary performers in bluegrass music, will return to the Appalshop in Whitesburg on Thursday, Dec. 6, for a 7:30 p.m. performance.

Sparks has spent more than 40 years delighting bluegrass audiences all over the world and has earned the admiration of fans and musicians alike. His career spans from his teenage years with Ralph Stanley and The Clinch Mountain Boys to his recent recognition as the International Bluegrass Music Association Male Vocalist of the Year in 2004 and 2005, as well as past winner of IBMA’s Album of the Year and Recorded Event of the Year.

Sparks defines the meaning of “lonesome” in his singing and is recognized as one of the most dynamic guitar pickers on any stage. His interpretations of classics and contemporary material, too, touch the hearts of bluegrass fans – young, old and in the middle. He has produced dozens of albums featuring his bluesy, driving guitar licks and hauntingly soulful singing.

Sparks and his band, the Lonesome Ramblers, will be in concert in the Appalshop Theater in downtown Whitesburg. Tickets are $15 for adults and $5 for students. Reservations are recommended and can be made by calling the Appalshop at (606) 633-0108.