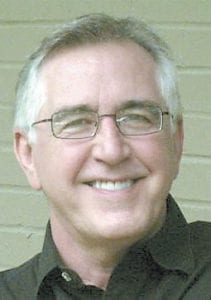 An artist whose prints can be found on the walls of many Letcher County homes died last week at the age of 64.

Paul Brett Johnson, of Lexington, died June 1 after a brief illness. Johnson was known in Fayette County as a children’s book illustrator and author who has his name on about 20 books. His first book, “The Cow Who Wouldn’t Come Down” was published in 1993.

“He was way much more than an illustrator,” said Sarah Blair, owner of Omni Gallery in Whitesburg. “We know him as an artist here. He captured the way of life in the mountains. He showed it in pictures.”

He used his full name Paul Brett Johnson on all of his children’s books and signed his artwork as Brett Johnson.

About 10 years ago Johnson, who was from Mousie in Knott County, told Blair that she could exclusively buy all of the prints she wanted and sell them in her store. 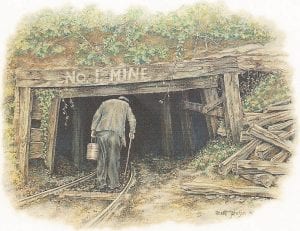 This painting titled “Number One Mine” is probably the best known work by artist Brett Johnson, according to Omni Gallery owner Sarah Blair. Johnson, a native of Knott County, died last week at age 64.

She said Johnson still sold originals, but has published several prints with her.

Blair became his art print agent and began selling his prints to other galleries. She asked him to paint a scene of Bad Branch Falls, which she published.

“Brett considered me to be the expert on his prints,” said Blair. “I am the one people call to ask me how much they are worth. People call me and tell me how much they have sold things for. I have always kept up with the values because people who own these want to insure them.”

She said Johnson was the most prolific artist of those whose artwork was showcased in her gallery.

“He was the cornerstone of my gallery,” said Blair. “I am just so devastated that there isn’t going to be anything else.” 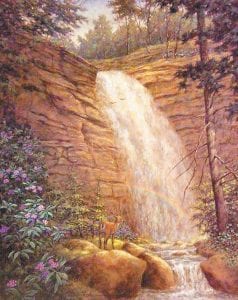 Johnson created a coal mining series in 1974, which is made up of six pieces including “Number One Mine”, “No Work Tomorrow”, “Coal Town”, “Going Home”, “Hard Times” and “The Family”.

“’Number One Mine’ is probably the best known,” said Blair.

The prints originally sold for $20 each when they were released 37 years ago. There were 1,000 prints of each scene.

The set was sold out when Blair became owner of Omni Gallery in 1983, but she has sold prints that people have decided to part with and bring into her shop.

“The only way you can find it is if someone has one they want to sell,” said Blair. “You couldn’t find them and people still wanted them.”

“Thirty years ago many people felt like ‘The Family’ was depressing because they seemed to have so little, but that was the way most people lived and Brett’s artwork captured a coal miner’s life as well as life in the mountains generally speaking and as it truly was,” said Blair.

She said she has plenty of the restrike prints left, which are still priced at $30 apiece.

“I will keep them as low as possible, for as long as possible,” said Blair. “They will probably fly now.”

“The Baptizing” is his single most valuable print. The current value is $7,000.

“Almost every funeral home around has a copy of ‘The Baptizing,’” said Blair.

“Amazing Grace”, which has a current value of $5,000, was released nine years after “ The Baptizing”.

“Brett didn’t like to print the same subject matter twice, but his baptizing scenes and his coal mining prints were so extremely popular that the demand didn’t die down even after they sold out,” said Blair. “So to better satisfy his public he painted ‘Amazing Grace’ and we published the restrike edition.”

Blair has 11 prints that are sold out which she recently got at an estate sale. These prints were valued between $300 and $1,200 on the secondary market, and are beginning to go up in value.

“’Shift’s End’ shows a man in the 1950s leaving the mine with his pony,” said Blair. “In ‘Remembering’ you see the same man, now older and retired and looking at a coal tipple remembering his life as a coal miner.”

“Long Forgotten” and “Lingering On” are each valued at $800.

The Modern Mining Series, which includes “Morning Shift”, “Loadout”, “In the Pit” and “Scale House”, are each valued at $300.

“I have been selling these sold out estate sale prints for $50 each and will continue to do so for a short period of time,” said Blair. “The low prices cannot be contained for very long.”

Blair said Johnson told her he fixed what nature didn’t do right by adding a tree or taking out a rock or painting a creek.

“Most of the time you wouldn’t recognize what he started with because he added or took away,” said Blair. “The things he chose to put in print are either actual places here or typical of the area and could be here.”

She said the photographs used in creating the coal mining series are located in the Alice Lloyd College archives. She said he mostly stayed true to the photographs for those pieces of art.

The latest piece that was released about a year ago is titled “The Babbling Brook.” She said that piece and another water scene, which is yet to be released, are Giclee printings, meaning inks and papers are used to protect from Ultraviolet rays.

Blair, who has been a friend of Johnson’s for more than 30 years, said Johnson was a kind and generous man.

“Brett was a nice, warm, generous man who will be sorely missed,” she said.