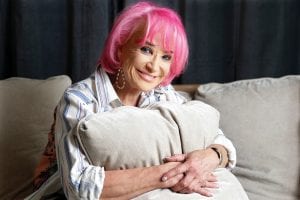 Tanya Tucker’s breakout country hit, “Delta Dawn,” topped the charts in 1972 when she was still a teen. (AP Photo)

The first time Tanya Tucker was nominated for a Grammy Award, it was 1972, it was for her breakout country hit, “Delta Dawn,” and she was just a teen. Now more than 45 years later, Tucker finds herself nominated for four Grammys, including song of the year for “Bring My Flowers Now,” competing against the likes of Lady Gaga and Taylor Swift.

“I’m beyond shocked. I’m very, very surprised,” Tucker told The Associated Press after the nominations were announced. She was also nominated for best country album for “While I’m Livin’,” best country solo performance and best country song for “Bring My Flowers Now.”

Although some may call her first album of new material in 17 years and her first Grammy nominations since 1993 a comeback, Tucker prefers to call the recognition “a start.”

“I’m very grateful that I could represent the music that brought me to the dance, the country music I was raised on,” Tucker said. “But it’s a start for me to do a lot of other kinds of music and that’s what I’ve been wanting to do.”

The aptly titled song was co-written by her producer, Grammy-winner Brandi Carlile, along with and Phil and Tim Hanseroth. The tune has Tucker reflecting on the long shadow of the miles she’s traveled, and the regrets and joys of a life well lived. The album was also produced by Shooter Jennings.

“I remember my dad telling me, maybe even before I got started, he told me, ‘Tanya, the biggest song you’re gonna have is the one you write yourself,’” Tucker said. “And here it is. It’s happened.”

Tucker now has 14 nominations over her career, but no wins. Now 61, Tucker said she’s ready for a win.