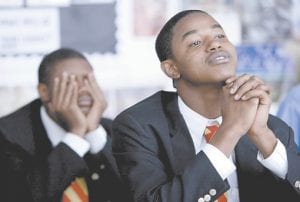 “The results were stunning. There’s no other word to use,” said Patricia Moss, academic dean at the Rhode Island boarding school where the study was done. “We didn’t think we’d get that much bang for the buck.”

The results appear in July’s Archives of Pediatrics
& Adolescent Medicine.
The results mirror those at a few schools that have delayed starting times more than half an hour.

Researchers say there’s a reason why even 30 minutes can make a big diff erence. Teens tend to be in their deepest sleep around dawn — when they typically need to arise for school. Interrupting that sleep can leave them groggy, especially since they also tend to have trouble falling asleep before 11 p.m.

“There’s biological science to this that I think provides compelling evidence as to why this makes sense,” said Brown University sleep researcher Dr. Judith Owens, the study’s lead author and a pediatrician at Hasbro Children’s Hospital in Providence, R.I.

An Archives
editorial said the study adds to “a growing body of evidence that changing the start time for high schools is good for adolescents.”

The fact that the study was in the exclusive setting of St. George’s School in Middletown, R.I., doesn’t necessarily weaken the results. Owens acknowledged that there might be more hurdles to overcome at poorer, public schools, including busing schedules, parents’ work hours and daycare for younger siblings. While these issues have killed many proposals elsewhere, some public high schools including those in Minneapolis and West Des Moines have adopted later starting times.

Mel Riddile, an associate director at the National Association of Secondary School Principals, favors later class times for teens but said most districts oppose it.

“It’s about adult convenience, it’s not about learning,” he said. “With budget cuts, it’s going to make it more difficult to get this done.”