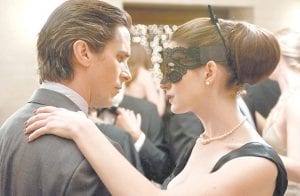 This photo shows Christian Bale as Bruce Wayne, left, and Anne Hathaway as Selina Kyle in a scene from the action thriller “The Dark Knight Rises.” (AP Photo/Warner Bros. Pictures)

Christopher Nolan concludes his Batman trilogy in typically spectacular, ambitious fashion with “The Dark Knight Rises,” but the feeling of frustration and disappointment is unshakable.

Maybe that was inevitable. Maybe nothing could have met the expectations established by 2008’s “The Dark Knight,” which revolutionized and set the standard for films based on comic books by being both high-minded and crowdpleasing. With Christian Bale as his tortured superhero starting from 2005’s “Batman Begins,” Nolan has explored the complicated and conflicting motivations of man as well as the possibility of greatness and redemption within society.

Here, as director and co-writer, he’s unrelenting in hammering home the dread, the sorrow, the sense of detachment and futility of a city on the brink of collapse with no savior in sight. Gotham is under siege in ways that tonally and visually recall 9/11; what is obviously the island of Manhattan gets cut off from the outside world at one point. Rather than seeming exploitative, it’s just one of many examples of the script from Nolan and his usual collaborator, his brother Jonathan, making the franchise feel like a relevant reflection of our times. Identity theft, economic collapse and an uprising of the disgruntled, disenfranchised have-nots against the smug, comfy haves also come into play. 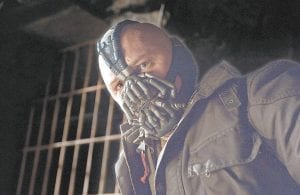 Tom Hardy co-stars as Bane in a scene from the action thriller “The Dark Knight Rises.” The film will be in theaters on Friday. (AP Photo/Warner Bros. Pictures)

There’s so much going on here, though, with so many new characters who are all meant to function in significant ways that “The Dark Knight Rises” feels overloaded, and sadly lacking the spark that gave 2008’s “The Dark Knight” such vibrancy. The absence of Heath Ledger, who won a posthumous Oscar for his portrayal of the anarchic and truly frightening Joker, is really obvious here. It retrospect, it makes you realize how crucial Ledger’s performance was in making that Batman movie fly.

By comparison, “ The Dark Knight Rises” is plotheavy, obsessed with process, laden with expository dialogue and flashbacks that bog down the momentum and — dare I say it? — just flat-out boring at times. Yes, the Batman world through Nolan’s eyes is supposed to be moody and introspective; you’ve got to admire the fact that he is willing to challenge us this way when summer blockbusters so often feel flashy and hollow. And yet at the same time, it takes some giant leaps with its characters which either make no sense, haven’t earned the emotions they’re seeking, or both.

“The Dark Knight Rises” does feature the kind of impeccable production values we’ve come to expect from Nolan’s films.

“The Dark Knight Rises” feels weighty and substantive, but it takes on an even grittier look than its predecessors as Gotham City devolves into desperation and ruin.

But Nolan’s approach is so coldly cerebral that it’s a detriment to the film’s emotional core. It’s all doom and gloom and no heart. There is no reason to care about these characters, who function more as cogs in an elaborate, chaotic machine than as real people whose souls are at stake.

It’s been four years since “The Dark Knight” came out but eight years have passed in terms of story. Bale’s Bruce Wayne suffers in self-imposed exile, sulking about Wayne Manor, mourning the loss of his darling Rachel and carrying the burden of blame for the death of District Attorney Harvey Dent. His goal of a peaceful Gotham has been achieved, but he’s left as a man without a purpose. Michael Caine, as the everloyal valet Alfred, brings dignity and eloquence to the film as he begs Bruce to carve out his own form of happiness. Fellow veterans Gary Oldman as Commissioner Gordon and Morgan Freeman as gadget guru Lucius Fox are their usual dignified selves, but they don’t register the way they should because the film is so overstuffed.

Several new characters manage to draw Bruce out of his funk in various ways. Anne Hathaway brings some much needed zest to the proceedings as Selina Kyle, otherwise known as Catwoman in the Batman universe, a slinky thief who punctures Bruce’s bubble when she lifts his fingerprints from his safe, along with a beloved pearl necklace. She’s selfish and cynical, only looking out for herself, but at least she goes about her crimes with some verve and style. They never call her Catwoman by name, and she’s never as campy as Michelle Pfeiffer and Halle Berry were in previous film incarnations of the role, but she’s always fun to watch.

The other woman in Bruce’s life, however, is woefully underdeveloped — which is a real problem because she plays a key role in the film’s climactic revelations. Marion Cotillard (one of many alumni from Nolan’s “Inception”) co-stars as Miranda Tate, a wealthy philanthropist who hopes to work with Wayne Enterprises on developing clean, sustainable energy. The romance that develops between her and Bruce is utterly unbelievable.

Joseph Gordon-Levitt adds a youthful presence as John Blake, an up-and-coming member of the police force who inspires Bruce to revisit his own childhood as an orphan. Gordon-Levitt as solid as always but there’s not much to his character aside from earnestness.

Then there’s Bane, a muscular mass of pure evil who orchestrates an elaborate takeover of Gotham City. The role is a huge waste of what Tom Hardy can do.

But he is the instigator of the film’s dazzling opening sequence, worthy of the best of James Bond: a daring aerial maneuver in which Bane kidnaps a scientist by hijacking his plane from the skies above. That’s probably the most effective of the many set pieces Nolan stages here, although the collapse of Heinz Field during a packed football game also has an urgent, visceral quality, with thrills that recall the most imaginative moments of “Inception.”

This is the problem when you’re an exceptional, visionary filmmaker. When you give people something extraordinary, they expect it every time. Anything short of that feels like a letdown.

“The Dark Knight Rises,” a Warner Bros. release, is rated PG-13 for intense sequences of violence and action, some sensuality and language. Running time: 164 minutes. Two stars out of four.