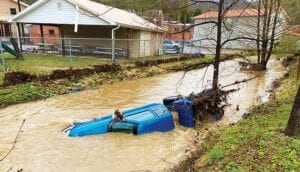 A pickup truck lay in the swollen Yonts Fork creek after heavy rains and flooding over the weekend. Emergency responders said the driver of the truck stated the vehicle was swept into the creek Sunday while attempting to cross the Second Street bridge near Fleming-Neon Middle School. The driver was not injured, but Neon and other areas throughout Letcher County are left suffering many flood-related issues.

Nearly three inches of rain fell on Letcher County from Saturday night to Sunday morning, sending streams out of their banks and mud rushing down mountainsides.

The worst of it hit just a month and a day after previous heavy storms flooded the county, destroying asphalt and gravel roads. This one, residents agree, was worse, and the National Weather Service bears that out. While the amount of rainfall was lower this weekend than during the February flood, the Kentucky River at Whitesburg never reached flood stage last month.

This weekend, it crested at 10.59 feet at Whitesburg, seven inches above flood stage.

“We had three vehicles there, and it got into them, but one wasn’t running, so we really just lost two vehicles,” Kentucky River District Health Director Scott Lockard said. “It got into the foyer coming into the health department, so we had to have the elevator pit pumped out and get the elevator repairman in, but it could have been a lot worse.” 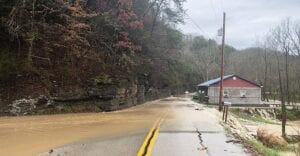 What floodwaters from rivers and creeks didn’t damage Sunday morning, stopped-up culverts did like this one at GW Webb Hollow at UZ. (Photo by Mike Caudill)

The “Coke Plant Curve” near Southeastern Kentucky Community and Technical College floods with a few inches of water fairly often, but on Sunday the North Fork of the Kentucky River was above the guardrail at the road’s low point. By Tuesday, the river level had fallen to 3.14 feet. Flooding was widespread across the county with bridges and culverts ripped from streams and some houses taking damage. At Company Branch of Craft’s Colly, formerly known as Snake Valley, a large slide cut off most of the stream and brought trees down onto the deck and swimming pool behind Eugene and Brandy Slone’s home. The blocked stream threatened to cause worse flooding up and down the hollow.

“It happened about 8 a.m. Sunday. We didn’t even hear it,” Eugene Slone said, standing on the deck near a tree trunk that splintered the privacy fence and squashed one side of the pool. “Our neighbor came knocking on our door yelling, ‘Get up! Get up! Your hill is sliding off behind your house.’” 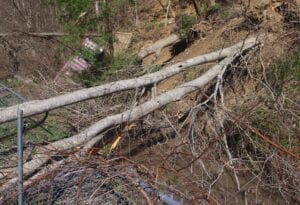 MUD SLIDE – The hillside behind Eugene and Brandy Slone’s home at Crafts Colly slid off during heavy rain Sunday morning, shoving their garden shed and much of the mountainside in the creek on Company Branch. Falling trees damaged their fence, deck and swimming pool. (Photo by Sam Adams)

The Slones have moved temporarily to the other end of their house, afraid that a tall pine tree pushed partway over by the slide will fall of their bedroom.

Eugene Slone said the Kentucky Division of Abandoned Mine Lands is supposed to send inspectors to check the slide. He said a father and son from Florida years ago, “mined every bit of the coal they could get and just pulled out and left.” If it was done before 1982, the state will fix the damage, Eugene Slone said.

At Neon, water was waist-high in the streets on Sunday morning and all roads into the town were closed. The water reached the threshold of the Neon Branch of the Letcher County Public Library, but didn’t reach the inside. City Hall was also spared, but several businesses around the intersection of KY 317 and KY 343, and along that side of the street had water in them, Mayor Susie Polis said.

“Got into a couple of churches, but not bad. The fire department had to do a few rescues, but they did a wonderful job and they’re still trying to get our town straightened up,” she said.

Polis said unlike the flood a month before, this one didn’t take out any bridges in Neon, but it was still much worse overall.

District 3 Magistrate Maverick Cook, whose district is part of Neon, said the damage is bad throughout the county.

“We got hit hard,” he said. “On the lower end of the county, where they have the bigger part of the Kentucky River, it’s really bad.”

Cook compared it to “a one-two punch.” The flood a month ago “stunned us, but this was the KO,” he said. “It washed every gravel road out to the point you can’t get a car out, but we’ve got a list of roads you can’t get a four-wheel drive out.”

Judge/Executive Terry Adams declared a local state of emergency on Sunday. There’s no word yet on whether the governor will declare an emergency over a wider area.