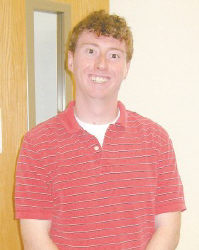 As a part of the Rural Drug Prosecution Assistance Project, the Letcher County Commonwealth’s attorney’s office has received a law clerk for the summer. The grant is through the U.S. Department of Justice.

Mark Rouse of Lexington, is a second-year student at the University of Kentucky College of Law.

During his internship Rouse has written motions, prepared for trials, updated case files, and researched issues and cases. Rouse was sworn in as a special stenographer so he could sit in on grand jury proceedings.

“This is the first year we have ever had a law clerk for the summer and he has been able to research,” said Letcher Commonwealth’s Attorney Edison G. Banks II. “I have tried to give him experience from routine theft up to drug cases.”

Banks hopes Rouse’s time in Whitesburg will have helped him to gain a general concept of criminal law.

“It has been a real eye-opening experience,” said Rouse.

He is the son of Don and Myra Alice Rouse of Lexington. He has one brother, Daniel, who will be a senior at Dunbar High School.

Rouse is the nephew of Owen and Barbara Wright of Whitesburg, with whom he is staying with while completing his 12-week summer internship.