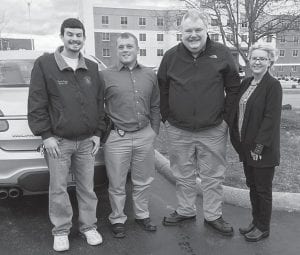 The program was held in Louisville on the University of Louisville campus and examined many of the highly complex issues that surround the investigation and prosecution of death cases resulting from the overdoses, not only of prescription drugs but more recently of heroin, fentanyl, methamphetamine, spice and other synthetic drugs.

In recent months Letcher County has seen a dramatic increase in overdoses and deaths from overdoses of methamphetamine and other synthetic drugs as prescription drugs have become much harder for addicts to obtain and they turn to these highly addictive and often deadly synthetic drugs.

Many of the synthetic drugs including heroin, methamphetamine, and spice that are being produced and sold are in reality a lethal dose of fentanyl. The manufacture and distribution of these illegal counterfeit and synthetic drugs has reached a near, if not actual, epidemic and in certain cases the resulting overdoses are tantamount to murder.

The daylong training explored recent developments in which under certain situations, the appropriate initial investigation of these deaths as homicides as opposed to mere deaths from drug overdoses could possibly lead to successful criminal prosecution for homicides and thereby address the wider issues of illegal drug manufacture and distribution, punish those responsible for the overdose deaths, and ultimately save lives.

All attending the conference reported that the conference was quite sobering and provided them with additional resources and techniques for the investigation and criminal homicide prosecution of qualifying drug overdose deaths. The attendees plan to share the information learned with the other local law enforcement agencies and individual officers in the upcoming weeks and expressed an absolute commitment to working together to successfully prosecute those responsible for manufacturing and distributing these often fatal and lethal dosages of heroin, fentanyl, methamphetamine and other synthetic and counterfeit drugs and who are ultimately responsible for the epidemic of overdoses resulting in death which are tantamount to murder.