Lawmaker pushes to keep 911 calls off the airwaves 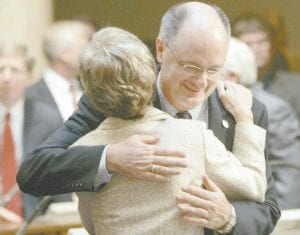 “It breaks my heart when I hear people, sometimes saying the last words they will ever speak, being broadcast on radio and television,” said Schickel, a newly elected state senator who is sponsoring legislation intended to keep the recorded calls out of the hands of broadcasters.

The Union Republican contends the recordings are being used to attract viewers, a charge that is denied by state media groups.

“It’s just unconscionable that we would be using 911 tapes, in my mind, just to boost ratings,” Shickel said.

Gary White, president of the Kentucky Broadcasters Association, which opposes the legislation, said broadcasters rarely use the tapes, and never to boost ratings.

“There couldn’t be anything farther from the truth,” White said. “They only use them to help make a story more informative and more enlightening to the public. We see absolutely no way that this would serve the public’s interest.”

Kentucky Press Association executive director David Thompson said the measure could take away critical public oversight of emergency dispatchers and law enforcement authorities, making it difficult to determine when they have done their jobs well and when they haven’t.

The Kentucky Open Records Act requires emergency dispatching centers to make 911 calls available to the public when requested. That law has provided Kentuckians with sometimes highly emotional accounts of any number of heart-rending tragedies, including the first reports of a teen having her feet severed on a Louisville thrill ride in 2007 and the deadly crash of Comair flight 5191 at Blue Grass Airport in 2006.

Schickel said he especially wants to put pleas for help from crime victims off limits.

Instead of audio recordings, Schickel’s bill allows only for the release of written transcripts of calls. It also requires redaction of certain details, including the identity of callers, medical information, and statements that could compromise a criminal investigation or create prejudice in court cases.

Schickel said he will not agree to changes that would allow the release of audio for public broadcast.

He has agreed, however, to a change suggested by media groups that would allow reporters and others to listen to the audio recordings to ensure the accuracy of the transcripts.

“I do see where they’re coming from,” Schickel said. “I will never be part of any legislation that restricts the public’s access to records.”

Schickel, who served as U.S. marshal for the eastern half of Kentucky, said he’s hopeful he can garner enough support to get the legislation passed in this year’s legislative session to protect crime victims and their families from having their calls for help broadcast to the world.

“They’re already victims of unfortunate circumstances, and this just further adds to their victimization,” Schickel said.

The legislation is Senate Bill 30.