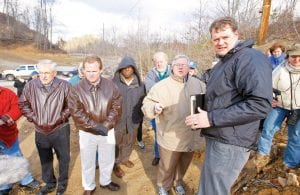 TOURING MINE SITES – State Rep. Harry Moberly, tan jacket, and other members of the House Appropriations and Revenue Committee which he chairs, listened to Greg Howard of Letcher County, right, as they viewed a valley fill site during a mountaintop removal tour sponsored by Kentuckians For The Commonwealth near Kodak, Ky., in Perry County on Monday. Bad weather caused the cancellation of aerial tours, but the group still viewed strip sites from the ground and met with residents concerned about mining issues. (AP Photo/Lexington Herald-Leader, Charles Bertram)

Eastern Kentuckians concerned about mountaintop removal felt they didn’t have a voice in Frankfort, so they brought Frankfort to eastern Kentucky.

Members of the House Appropriations and Revenue Committee arrived in Perry County on Monday to learn about the impacts of mountaintop removal through a tour organized by Kentuckians for the Commonwealth, an environmental group that opposes such mining activity.

Chairman Harry Moberly, DRichmond, said members of the committee decided to make the visit after hearing from opponents of mountaintop removal during this year’s special session. The session was held for an energy bill that offers million in financial incentives to companies that build plants in Kentucky to convert coal to cleaner-burning alternative fuels.

Strip mining and mountaintop removal are the best known forms of surface mining, in which vegetation, soil and rock overlying the mineral deposits are scraped away and usually dumped in nearby valleys.

“After today, you will be able to make more educated decisions and speak with more authority about what happens here,” he said.

The lawmakers heard dozens of complaints from eastern Kentuckians who said they are fed up with polluted streams, poor drainage, barren landscapes and incessant blasting, all of which they blame on the coal industry.

Although industry heads lobby lawmakers to offer incentives to expand mining in Kentucky, Caylor was concerned that legislators were getting a biased view of mountaintop removal.

“We would love to give our viewpoint on this,” said Caylor, who argues that mountaintop removal affects less than 7 percent of central Appalachia.

He said the Kentucky Coal Association had offered to conduct legislative tours of the benefits of mining activity to lawmakers, but nobody accepted.

Caylor added that the organization believes any damage done to private property or to quality of life by coal companies should be remedied.

Rep. Charlie Siler, RWilliamsburg, said he had “mixed feelings” on mountaintop removal, though he related to the folks in eastern Kentucky.

“You’re mountain people and so are we,” said Siler of his constituents in southern Kentucky. “I think a compromise must be sought in order for Kentucky to move forward in energy.”

He added that the Perry County airport at which KFTC’s presentation was made wouldn’t have existed in eastern Kentucky’s rugged terrain without mountaintop removal.

Evelyn Gilbert, who lives near a surface mine at Eolia in Letcher County, said her community’s quality of life shouldn’t be sacrificed in the pursuit of commercial development and energy.

“I know we live in a mining community and the workers have to make money and feed their babies,” she said. “But I don’t understand why the coal companies have to do it in such a way that destroys our communities.”

Rully Urias, who lives near a strip job in Pike County, said he has to limit his 4-year-old daughter’s play time outside due to high dust levels and fly rock from nearby blasting.

Urias is currently in a legal battle with a coal company, which he believes has polluted his water supply. Water quality tests show that his drinking water from his family well contains levels of arsenic beyond the legal limit.

“I’ve seen some of the most pristine scenery destroyed in just a few months,” he said.

Couple shoot, kill man who had been staying in houseFall festivals are much in doubt17th virus case in county