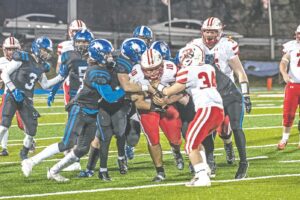 A host of Letcher County Central defenders work together to bring down Perry County Central’s quarterback in last Friday’s win over the visiting Commodores, who were eliminated from postseason play. LCC faces Class 4 District 8 powerhouse Johnson Central in the second round of the state football playoffs on Friday. The game will be played at Johnson Central. (Photo by Chris Anderson)

Letcher County Central advanced to the second round of the Kentucky High School Athletic Association playoffs with a convincing 47-13 win over rival Perry County Central. The Cougars hope to advance to the third round when they travel to Johnson CentralthisFridayfora7p.m. kickoff.

“That was a great win,” said Cougars head coach Junior Matthews. “(It’s the) first time since 2009 we have won playoff games in back-to-back seasons. Our team played really well in all phases, offense, defense, and special teams.”

Quarterback Carson Adams had four total touchdowns to lead the way for the Cougars, who also had kickoff return touchdowns by both Nicolas Haning and Wyatt Ison.

The game started with a bang when Haning caught the opening kickoff on the run, then broke a tackle and used a spin move to split two defenders while racing his way for an 83-yard touchdown return. Jonah Little made the extra point to give LCC a 7-0 lead.

Perry County Central had a 13-play drive that ate up much of the first quarter clock to get to the LCC 13-yard line. Facing fourth down and four yards to go, the Commodores went for the first down and the quarterback keeper was stopped just short of the line by a host of Cougar defenders for a turnover on downs. 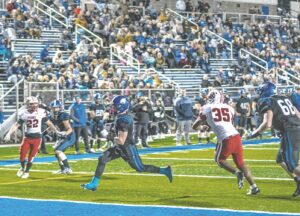 Letcher Central sophomore Isaac Matthews cruises into the end zone on a successful rushing attempt in last Friday’s 47-13 win over Perry Central in the opening round of the state football playoffs. Matthews rushed for 59 yards in the game on 13 attempts.

After the LCC offense couldn’t move the ball, Perry Central downed the Cougars’ punt at the LCC 43-yard line. On third and long after a penalty on Perry Central, LCC defensive tackle Dakota Hall sacked quarterback Chanse Mckenzie to force the Commodores to punt the ball back to the Cougars.

Now in possession of the ball, LCC’s Carson Adams found Haning on a slant pattern for a 61-yard gain to get a new drive started. Two plays later Adams connected with Wyatt Ison on a corner route in the end zone for a 19-yard touchdown. The extra point increased the Cougars’ lead to 14-0 early in the second quarter.

After consecutive three and outs by both offenses, the Cougar defense forced yet another punt that went out of bounds near midfield. On fourth and two, LCC gave the ball on a fullback dive to Jackson Meade, who gained five yards for a first down. On the next play Adams completed a pass to Ison for a 15-yard gain. Two plays later Adams completed a wide receiver screen pass to Little, who split the defense for a 16-yard touchdown. The extra point was no good, leaving the score at 20-0.

Perry Central quickly answered with a 69-yard touchdown pass on a screen play from Mckenzie to receiver Cade Miller. The extra point made the score 20-7 at halftime.

To start the second half, the kickoff by LCC’s Jonah Little went to the end zone for a touchback. On the first offensive play from there, a fumble was recovered by LCC defender Kaden Barnette to give the Cougars great field position.

Jonah Little caught a swing pass and turned it upfield for a 20-yard gain to take the ball to the PCC 10- yard line. A couple of plays later, running back Isaac Matthews took the pitch from Adams and scored a seven-yard touchdown. Receiver Alex Blair caught a pass from Adams in the corner of the end zone for the two-point conversion to increase the LCC lead to 28-7 early in the third quarter.

Perry Central used an 11-play 56-yard drive capped off by a fiveyard touchdown run by Mckenzie to cut the lead to 28-13, where the score remained after the extra point kick was blocked by a leaping Cooper Bailey for the Cougars.

Needing to score quickly, the Commodores tried a squib kick that was picked up by LCC’s Wyatt Ison, who sped past the kickoff coverage for a 68-yard touchdown return. The kick split here the uprights to make it 35- 13 as the Cougars regained momentum with 5:29 win the third quarter.

The Cougars’ defense forced yet another three and out but a roughing the punter penalty on LCCNagave Perry Central a first down to extend its next drive Perry Central converted two fourth and short plays to move the ball to the  23-yard line, but three plays later a desperation fourth-down pass fell incomplete for a turnover on downs.

With Letcher Centralback in control of the ball and facing third and long, Perry Central was flagged for defensive pass interference when Adams threw a deep ball to Ison on a wheel route out of the backfield. The penalty gave LCC an automatic first down. Matthews had an eight-yard run, then running back Hayden Brashear took a handoff for a nine-yard gain. Adams then found little on an out route for a10-yard completion to the PCC nine-yard line. On the next play Adams scored on a quarterback keeper to extend the lead to 41-13 after the conversion attempt failed.

The Cougars’ defense forced another turnover on downs and the offense capitalized with a 10-yard touchdown pass from Adams to Little with just over a minute left to make the final score 47-13 in favor of LCC.

The Cougars were impressive in their first-round triumph, in particular, with how diversified their offense was. Carson Adams15 passes on 21attempts for 204 yards and3 touchdowns. Adams ran for 23 yards and a score. Jonah Little caught seven passes for 77 yards and two touchdowns. Nicolas Haninghad three receptions for 76 yards. Wyatt Ison had four catches for 46 yards and a touchdown. Isaac Matthews led the team in rushing yards with 59 yards on 13 carries and a touchdown handing and Ison botched kickoff return touchdowns and Little had an excellent showing kicking to give LCC a huge advantage in special teams. The defense was led in tackles by freshmen QuintonWilliams with nine. KeatonDay had eight tackles.KobyJohnson, Jonah Little, Trevor Branham, and JacksonMeade each had seven tackles for LCC. CooperBailey, Kaden Barnette, and Dakota Hall each had a sack for a Cougar defense that held Perry Central to 272yards on 65 plays.