LCC again looking to bounce back 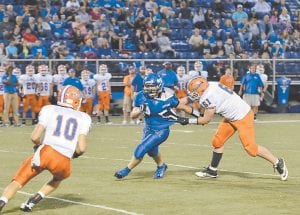 Letcher County Central defender Jacob Kiser (50) sets his sights on the Pike Central quarterback while fighting off a hold on the offense. (Photo by Brandon Meyer/B. Meyer Images)

The Letcher County Central Cougars lost in crushing fashion for the second consecutive week, this time 34-33 to visiting to Pike County Central.

LCC had a first and goal at the Pike Central 4-yard line up by seven points with less than three minutes left. The Cougars turned the ball over on downs and Pike Central marched 92 yards for the touchdown. The Hawks decided to go for two and quarterback Mac Justice rolled left and found Brad Elkins in the end zone for the deciding points.

Pike County Central kicked off and used trickery to seize the momentum immediately. Kicker Brad Elkins not only kicked an onside kick, but also recovered it to give the Hawks offense the ball at the LCC 48-yard line.

On second and 9, Letcher Central lineman Jordan Boggs and Jacob Kiser combined to sack Justice for an eight-yard loss to force third and long. The next play Justice tried to throw a seam route and the pass was intercepted by Cougar safety Josh Lee who returned it 20 yards. 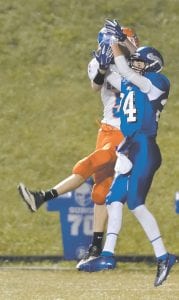 Tannar Lucas (24) intercepted a deep pass into the endzone during the Cougars’ loss to Pike Central. (Photo by Brandon Meyer/B. Meyer Images)

The LCC offense went 3 and out, but Zane Blair had a 57-yard punt to pin Pike Central back inside its own 10-yard line.

On third and nine, Justice threw a slant pass to Elkins for a 15-yard gain and on the next play connected with receiver Andrew Fields for 19 yards. Two plays later Zane Blair pressured Justice to force an incompletion and a punt.

LCC junior running back Jaylyn Williams gained 12 yards on a trap run to give the offense its first first down of the game with just under a minute left in the first quarter. Williams took a pitch around left end for 13 yards the next play, but the drive stalled at midfield and the Cougars had to punt again.

Justice had a 77-yard pass to Seth Conn on a quick out where Conn broke numerous tackles before being chased down from behind by a hustling Hunter Hall at the six-yard line. On third and goal, Elkins caught a five-yard touchdown pass from Justice. The two-point conversion was no good, but Pike Central took a 6-0 lead with 11:14 to play in the second quarter.

Pike Central recovered another onside kick, but it didn’t travel 10 yards so LCC got the ball at the PCC 48-yard line. Williams had a 12-yard run and then a 17-yard run where he simply dragged four defenders on his back the last seven yards to get in the red zone. On the next play Williams went untouched seven yards for the score. Blair made the extra point to give the Cougars their first lead of the game, 7-6.

Pike Central scored a touchdown on a 43- yard pass from Justice to Matt Turnmire. Hall broke up the two-point conversion attempt to keep the score at 12-7 PCC.

Letcher Central started its next drive at its own 35- yard line. Hall ran up the middle for 10 yards. Williams had consecutive runs of 27 and 13 yards to set up a first and goal. Blair rolled right and connected with Tanner Lucas for a 5-yard touchdown. The extra point made it 14-12 Letcher Central with 5:52 to play in the half.

After a Pike Central punt, Williams gained 23 yards on a toss sweep, then juked a defender, stutterstepped to shed another and burst up the middle for a 27-yard run. The next play was a three-yard touchdown run by Williams to increase the Cougar lead to 20-12 with under a minute left in second quarter.

Turnmire returned the kickoff 75 yards for PCC. Then Justice avoided what looked like a surefire sack and found Turnmire inside right pylon for a touchdown. The two-point conversion was no good and the halftime score was 20-18 LCC.

Pike Central started the second half with the ball and had a prolonged drive. Once in the red zone, Jacob Kiser sacked Justice to make it third and long. Tanner Lucas had a great interception on a fade pattern in the end zone for a touchback.

The Cougars wasted no time capitalizing on the turnover. Blair found a streaking Lucas down the left sideline for an 80-yard touchdown. Blair’s extra point sailed through the uprights for a 27-18 lead.

Pike Central quickly answered with a 32-yard touchdown pass from Justice to Elkins. Chase Patton crossed the goal line for a two-point conversion to cut the lead to 27-26.

PCC tried an unsuccessful onside kick to give the Cougars great field position. Blair hit Isaiah in stride on a slant route for 15 yards and a big third down conversion. Three plays later Blair snuck it in from one yard out for the score and lead 33-26.

Pike Central rolled the dice and went for it facing a fourth and two on the first play of the fourth quarter. Justice rolled right and connected with Elkins on a 12-yard pass. The Hawks eventually got into the red zone and Tanner Lucas had back-to-back pass deflections to force fourth and goal. Hunter Hall batted down the fourth-down pass from Justice to force a turnover on downs.

The LCC offense methodically took the ball down the field aided by a 32-yard pass to Tyree from Blair. Williams had a sixyard run on third and two to make it first and goal from the four-yard line with under four minutes left. A block in the back penalty pushed the Cougars back and they eventually turned the ball over on down at the PCC 8-yard line with 2:49 left.

Justice used a no huddle offense and hit passes of 15, 12, 8, and 11 yards and on the last pass the Cougars got a late hit to move the Hawks into the red zone. Justice rolled right and kept the ball for a 13-yard gain to the one-yard line. On the next play Chris Wesley ran it into the end zone up the middle. PCC went for two and Justice used a bootleg and hit Elkins for the game winning twopoint conversion.

LCC got the ball but Blair was sacked on fourth down to end the game and give Pike Central the 34-33 win.

The Cougars will look to regroup on the road at Sheldon Clark Friday at 7:30 p.m.