A panoramic view of the National Archery in the School Program (NASP) world competition in Madison, Wisconsin. Letcher County Central finished eighth in the event.

For the second year in a row, the Letcher County Central High School archery team placed eighth at world competition.

“We stayed in second place most of the day, but finally ended up in eighth place overall,” said LCCHS Head Archery Coach Mike Sexton.

In the fourth year of the LCCHS archery program’s existence, Sexton is pleased that the seven seniors on the team were able to compete in two world events.

“To get those kids back to world competition is pretty special,” said Sexton. “I am proud of each and every member of the team. They practice hard every day. They love the sport and are dedicated to it.”

The LCCHS archery team was one of 44 teams to compete in the National Archery in the Schools Program ( NASP) World Competition on July 12 in Madison, Wisconsin. The group’s composite score was 3,321 out of 3,600 possible points.

Sexton is hopeful that the archery team will return to world competition next summer. 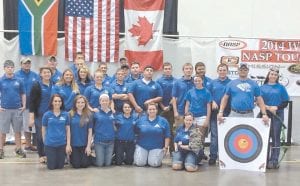 For four consecutive years, the LCCHS archery team has participated in the NASP state competition in Louisville.

The LCCHS archery program has two teams, which placed first and second at the 12th Region tournament of the NASP in February. Nine LCCHS female archers and eight of the male archers scored in the top 10 in each of their divisions at the regional competition.

Sexton credited the community for contributing to paying for travel, lodging and dining expenses for the trip to Wisconsin.

“We’ve done more fundraising this year than we ever had,” said Sexton.

Lakelyn Cole led all LCC archers in the NASP (National Archery in the Schools Program) with an overall rank of 35 out of 1,135 girl archers. She ranked 22 out of 326 high school girls and eighth of 99 10th grade girls.