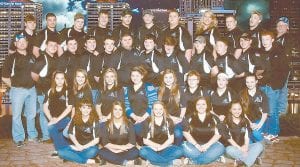 In its third year of existence, the Letcher County Central High School archery team is ready to compete this week on the national level.

“It has been their willingness and desire to win,” said Mike Sexton, LCCHS archery coach. “That is why these kids are where they are. They probably don’t get the recognition that they should.”

Thirty- eight LCCHS archers will shoot at the National Archery in the Schools Program (NASP) Nationals at the Kentucky Fair and Exposition Center in Louisville on May 10 and May 11. Two teams will represent LCC at the national competition. The varsity team has 22 students and the junior varsity team is made up of 16 students.

Each team must have a minimum of 16 participants and a maximum of 24. Scores of the top 12 are compiled. Four of the 12 scores must be “opposite gender.” The LCC archery team consists of 16 females and 22 males.

“These kids have worked really hard to get where they are and to have done what they have done,” said Sexton. “I am proud of each and every one of them.”

Sexton said even if his team qualified for the world competition, he doesn’t know if it will participate this year because of the travel and lodging expenses.

“Next year we should be able to have the funding to go,” he said.

In all three years the LCC archery team has competed, it has advanced to the state meet.

In 2011, LCC placed third in its region, which also included Floyd, Harlan, Lee and Leslie counties. The team, which was comprised of 32 shooters, placed 28th out of 48 teams in the NASP state competition held in Louisville.

In 2012, LCC placed second in the regional competition and 18th of 52 schools competing in the NASP state competition.

After bouncing from place to place trying to find a consistent location to practice, the archery team now has a permanent site — the former diesel mechanics bay at the old vocational school — where it is able to practice three days a week for about 2-1/2 hours.

Each season he has also coached students who have never held a bow and arrow.

“Those kids are the easiest to teach,” said Sexton. “Ones that have never done it don’t have bad habits.”

About 70 percent of the archers don’t participate in any other school sport, Sexton said.

“It gives kids who don’t compete in football or baseball an opportunity to compete in a sport for their school,” he said.

“It teaches patience,” said Sexton. “It teaches mental self control.”

He said archers learn the importance of being part of a team.

“You are relying on your partner you are shooting with to get a good score,” he said.

He said members of the team also learn to set goals and the importance of meeting those goals.

“We set a certain score for each kid and they work at it until they reach that score and then we bump it higher,” said Sexton.