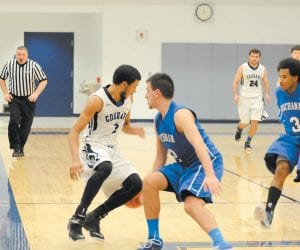 Action was fast and furious Tuesday night as the 53rd District basketball tournament continued at Letcher County Central High School. In the photo above, Cougar guard Torell Carter outruns the ball as he is guarded by a June Buchanan player during LCC’s 52-43 win over the Crusaders. The win assures LCC of an appearance in the district championship game and a berth in the 14th Region tourney. Carter had a game-high 25 points to lead the Cougars. Jordan Gregory had 8, Austin Banks 6, and Tyler Collins 5. Hunter Hall (24 in photo) also had five points, while Isiah Wallace scored 3 for LCC. June Buchanan was led by Luka Stojicevic’s 18 points. The Crusaders’ Prince Anosike blocked 13 shots during the contest. (Photo by Chris Anderson)