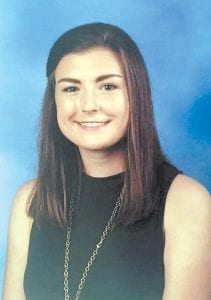 A Letcher County Central High School band student has been selected as a Kentucky Ambassador of Music to tour and perform in seven European nations this summer.

Brooke Saurer, 18, daughter of James and Valerie Saurer of Partridge, is one of 300 Kentucky students chosen for the trip.

According to a release from the program, students were nominated based on musicianship, leadership and character and were selected by invitation only.

Saurer has been a member of her schools’ concert bands for eight years and marching band for six years, directed by Jason Griffith and Rob Sheeler. She plays oboe and clarinet, but will play oboe in the concert series, her mother said.

Dr. Frederick Speck, Director of Bands at the University of Louisville, and Dr. Kent Hatteberg, Director of Choral Activities, will be the music directors on the tour. Speck will conduct the Honor Bands and Honor Chamber Orchestra and Hatteberg will conduct the Honor Choir. The tour is designed by Voyageurs Ambassadors of Music, a Denver agency specializing in European music tours for numerous statewide Ambassadors programs.

Students will travel to Louisville June 25 for five days of rehearsal and orientation, and will perform two pre-tour concerts at Comstock Concert Hall on the U of L campus June 29. The concert bands will perform at 5:15 p.m., and the choir will perform at 7:15 p.m. Both are free and open to the public.

The students will leave June 30 for the 16-day tour of England, France, Switzerland, Liechtenstein, Austria, Italy and Germany.

Valerie Saurer said the students will perform in five of the seven countries.

Parents are raising money for the students to go on the tour, and the Saurer family is still accepting donations that can be mailed to 67 Arrow Ridge Rd, Partridge, KY 40862.

Some parents are going with the students, but Mrs. Saurer said Brooke is going without them.

“It’ll be a good experience for her to go without us,” Mrs. Saurer said.

The Kentucky Ambassadors of Music tour is an educational program designed to allow musical honor students to perform while exposing them to cultural enrichment abroad.