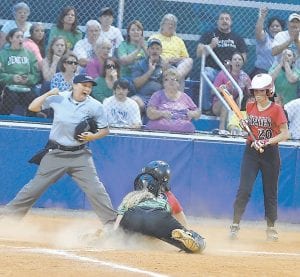 A Jenkins runner was called out at the plate on this close play during the Lady Cavaliers’ 3-2 defeat at the hands of Powell County. (Photo by Brandon Meyer,

The Letcher County Cougars fell to eventual 14th Regional Tournament champion Hazard on May 27 to be eliminated from post-season baseball.

The Jenkins Lady Cavaliers bowed out a day later, losing to Powell County in a 3-2 game.

In the first game of the 14th Regional Tournament, the Jenkins Lady Cavaliers faced the Hazard Lady Bulldogs. Jenkins didn’t waste any time getting on the board. Melissa Bartley had a lead-off triple to left field and then scored on a passed ball. Lexi Stambaugh followed with a single to right and Whitney Creech tripled to score Stambaugh. Creech then scored on a single from Mercedes Boggs, making the score 3-0 after the first inning.

In the third inning, Melissa Bartley and Lexi Stambaugh once again led off with singles and advanced on stolen bases. Whitney Creech tripled again, scoring Bartley and Stambaugh, and a single to left from Mercedes Boggs scored Creech.

Caitlynn Estevez hit a double to left to score Boggs. Katie DePriest then came in to pinch run for Estevez and moved over on a wild pitch. McKenzie Gibson singled, scoring DePriest and making the score 8-0.

In the fourth inning, Whitney Creech doubled, Mercedes Boggs received a walk and Caitlynn Estevez hit a triple to right scoring both runners. Charity Niece got on base by being hit by a pitch and McKenzie Gibson singled. Niece scored on a fielder’s choice and Gibson on a fielder’s choice, making the final score 12-0.

The Lady Cavs scored 12 runs on 13 hits, Hazard was shut out on 2 hits. The Lady Cavs had five players with good hitting, Melissa Bartley 2 for 4, Lexi Stambaugh 2 for 3, Whitney Creech 3 for 3, Mercedes Boggs 2 for 2 and Caitlynn Estevez 2 for 3.