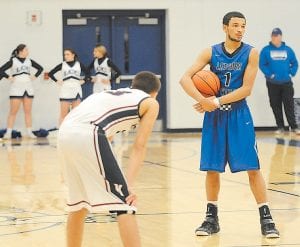 DELAY OF GAME – Letcher Central’s Torell Carter stands near center court holding the ball during the district championship game against Knott Central last week. Carter, with the Cougars trailing by nine points in the second quarter, held the ball for more than four minutes to close out the first half of the game. Knott Central went on to win 48-28 in the game. (Photo by Chris Anderson)

The vertically challenged Cougars (one player over 6’2”) overcame many obstacles this season from their season opener to last week’s district tournament. The Cougars have struggled offensively. Other than sophomore guard Torell Carter, there has not been a consistent scoring threat. However, the Cougars have handled the backup scoring to Carter by committee with different players stepping up in different games. Carter, and his role players, have surprised a lot of teams by their determination on both ends of the court, and they have won games they were not expected to win.

This Cougar posted a 15-10 record during the regular season and finished second in the 53rd District behind highly ranked, seasoned, and talented Knott County Central.

In recognizing individual efforts during the regular season, three players from LCC, Carter along with juniors Jordan Gregory and Tyler Collins, were named to the All-53rd District Team.

The Patriots (27-2) are ranked second in the state and may be the best team the 14th Region has produced in several years. They can make a serious challenge for the state championship next month in Rupp Arena.

Five-time defending 53rd District champions Knott County Central made it six straight when the Patriots pulled away in the second half for their impressive 48-28 win over the Cougars in the district championship at Ermine.

Sparked by All-State senior guard Cameron Justice, the Patriots led 18-11 after the first quarter and 23-16 at the half. Justice, a Vanderbilt University signee, finished with a game-high 25 points.

With sophomore guard Torell Carter providing nearly all the Cougars’ offensive output, LCC trailed just 7-6 early in the first quarter after the first of Carter’s three first-half treys. Carter, who finished with 18 points, scored 14 in the first half.

LCC trailed 23-14 after Justice’s trey with 5:15 left in the first half. LCCHS then took the air out of the ball and, with the Patriots content to just sit back and watch, did not take another shot until senior forward Hunter Hall was fouled and converted a pair of free throws with just three seconds left in the first half.

Early in the third quarter, the Patriots, appearing to not be content to allow LCCHS to hold the ball, came out with great defensive intensity. Fueled by LCCHS’s turnovers, KCCHS went on an 10-2 run and extended its margin to 33-18 with 4:12 left in the third quarter.

A pair of treys by sophomore guard Austin Banks allowed the Cougars to hang around, trailing the Patriots just 38-24 heading into the final quarter. Down the stretch, the Patriots demonstrated why they are the second-ranked team in the state. The Patriots called off the mismatch after taking a 48-26 lead with 2:58 left. From that point, the Patriots held the ball until the final seconds when Hunter Hall’s meaningless steal and uncontested layup set the final score.

Banks finished with six points and Hall wound up with four points.

All-State senior center Evan Hall finished with 10 points for the Patriots and freshman Isaac Caudill came off the bench to score eight points.

This opening round matchup in the 53rd District Tournament in Ermine last week was a grudge match between two teams who really struggle to play nice with each other on the basketball court.

The teams split their two regular season games with JBS edging visiting LCC 35-34 on January 6, and then the Cougars winning 72- 69 in double overtime at Ermine on January 16.

In the district faceoff with a regional spot on the line, both teams struggled offensively early because of numerous turnovers, fouls, sloppy play and poor shooting.

By taking the ball inside early, the Cougars forced JBS’s twin towers, Idris Akinyemi and Princewell Akini, into foul trouble, which allowed LCC to pull away to a 31-16 lead by the half.

The pushing and shoving continued in the third quarter with both teams managing only one basket each for the first half of the third quarter. Tyler Collins’s layup with 1:40 left in the third ended LCC’s nearly four-minute scoring drought and kept the Cougars in front 35-23.

The physical play kept growing until a double technical was called inside the final minute, but the third quarter ended with LCC in front 35-26.

The Crusaders’ senior point guard Luka Stojicevic’s pair of free throws cut the Cougars’ lead to 38- 34 with 5:10 left to play, completing an 18-9 run by the Crusaders to close to within four of the Cougars.

LCC responded with Torell Carter scoring six of the Cougars’ next nine points to extend LCC’s lead to 47-39 with 1:38 left to play.

After Stojicevic’s trey at the 1:14 mark cut LCC’s lead to 47-42, Carter connected on five of six from the charity line to clinch the win for the Cougars. The victory was Coach Robert Hammonds’s 100th win as the Cougars’ coach.

Carter, a 6’1” guard, led the 17-10 Cougars with a game-high 24 points. He also claimed eight rebounds. Hunter Hall, a 5’11” senior forward, turned in a huge game by scoring five points, pulling down 11 rebounds and dishing off two assists and blocking a pair of shots. LCC outrebounded JBS 43 to 25.