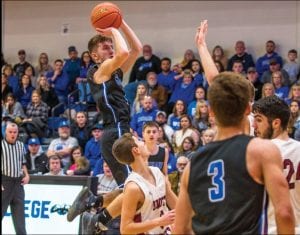 Letcher Central senior Parker Williams pulls up for a jumper in Friday’s championship game of the boys’ 53rd District Tournament, played at Alice Lloyd College. The Cougars edged Knott Central in the game, winning 45-44 on a final-seconds shot. The Cougars are set to meet Owsley County in the opening round of the 14th Region Tournament on Thursday. (Photo by Chris Anderson)

The Letcher County Central Cougars upset the Cordia Lions and Knott County Central Patriots to win the 53rd District Boys’ Basketball Tournament and advance to this week’s opening round of the 14th Regional Tournament.

LCC advanced to the district final by defeating Cordia, 50 to 47. Coach Winston Lee’s Cougars were led in that contest by Parker Williams, who scored 16 points, and Dylan Webb, who was a perfect five-for-five on two-point field goals on his way to 12 points overall. Joby Johnson scored 10 points, Ryan Lebrun had 5 points, and Matthew Dicks scored 3 points. Bodie Bentley and Isaac Lucas each scored 2 points. 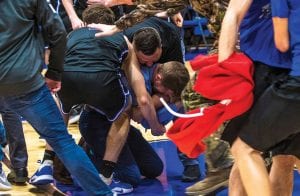 Letcher County Central High School players and coaches celebrated at the end of the Cougars’ thrilling win over Knott County Central in the championship game of the boys’ 53rd District Tournament. The win enabled LCC to advance to the 14th Region Tournament. (Photo by Chris Anderson)

All told, Dylan Webb shot a scorching 83.3 percent from the field, his only miss on a three-point attempt. He also went two-for-three from the foul line. Webb also led the Cougars in rebounding, with 11.

If the Cougars defeat Owsley County, they will advance to meet the winner of the Hazard vs. Breathitt County game at 4 p.m. on March 8.