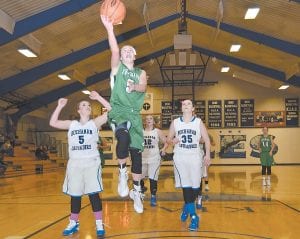 The Cougars defeated John I. Burton (Va.) in the second round on December 29 before losing to Eastside (Va.) in the final round December 30.

The 9-3 Cougars played South Laurel Tuesday evening in the opening round of the annual eight-team week-long WYMT Classic at Knott County Central High School. The semi-finals and finals will be this weekend.

The Cougars begin a four-game home stand next week with critical district games against 7-5 Knott Central on January 12 and 10-2 June Buchanan on January 15. Buckhorn (6-8) visits LCCHS on January 19 and 10-2 Perry Central follows on January 21.

Eastside avenged an earlier 71-37 thumping at Letcher Central on December 7 by outlasting the Cougars 76-73 in the final round of the Coalfield Classic. Eastside pulled off the upset by making shots — from both the free throw line (28/36) and from the floor (22/37 field goal attempts).

LCC led 12-9 after the first quarter but the Cougars’ shooting woes allowed Eastside to tie the game at 22-22 at the half. The Cougars’ shooting woes continued in the third quarter and Eastside pushed out to a 45-28 lead going into the final quarter. Eastside withstood a furious fourth-quarter rally by the Cougars, who trailed 70-61 with 1:37 left to play. LCCHS had a final shot to tie, but junior Torell Carter’s shot from behind the arc failed to connect.

Eastside, now 6-3, was led in scoring by Derrick Cusano’s 31 points and 13 rebounds. Boles and Counts added 13 points each.

This game was much closer than the final score as the Letcher Central Cougars outscored John I. Burton 18-10 down the stretch to pull away for the 65-50 win in the second round of the Coalfield Classic.

The Letcher Central Cougars saw their eight-game winning streak snapped 76-65 by Mountain Mission in the opening round of the Coalfield Classic in Wise, Va., on December 28.

The Cougars led 12-9 early on senior Jordan Gregory’s trey but then fell behind 21-16 after the first quarter and 45-35 at the break. LCC trailed 59-53 with 1:40 left in the third quarter, but a pair of turnovers and missed free throws allowed Mountain Mission to extend its lead to 63-53 going into the final quarter.

The Cougars battled back and closed to within 66-61 with 2:39 left to play on Austin Banks’s trey, but three turnovers and three missed shots down the stretch allowed Mountain Mission to hang on for the win.

LCC’s defense came up with 11 steals and forced Mountain Mission into 24 turnovers, but the Cougars could not offset their 36-17 rebounding disadvantage.