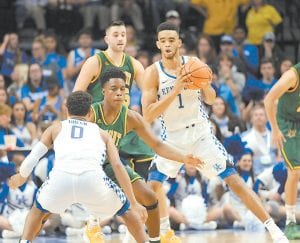 Sacha Killeya-Jones has found his niche is playing more and being more productive for UK this season. (Vicky Graff Photo)

The Letcher Central Cougars are on the road this week with games at Eastside (Va.) on Friday, December 8, and at Belfry next Tuesday night, December 12. The Cougars have only one more home game this month — against June Buchanan on Monday, December 18, following away games at Cordia on December 14, and at Jenkins of December 15.

The visiting Wolfe County Wolves, led by balanced scoring, pulled away from the Letcher Central Cougars late for the 70-58 victory December 2.

The Letcher Central Cougars dropped their season opener, 59- 54, at home December 1 against the defending 13th Region champs, Harlan County Black Bears, who were 31-4 last year and are a pre-season favorite to successfully defend their regional championship this season.

The Cougars lost all three starting guards off last season’s 24-9 squad — including All-Stater Torell Carter, who is playing very well at Berea College this season.

The Cougars shot the basketball well and rebounded adequately but could not survive their own mistakes. The Cougars were guilty of 21 turnovers, including nine charging fouls, and lost two starters due to fouls.

The Cougars led 18-10 after the first quarter but the charging fouls in the second and third quarters limited their aggressiveness and allowed Harlan County to employ an effective half-court offense in the second half that was the difference in the game.

The teams were tied 27-27 at the half but Harlan County pulled in front 47-42 heading into the final period.

As a team, the Cougars connected on 19 of 42 from the floor (0 of 6 from three-point range) for 45 percent. Harlan County connected on 18 of 56 for 32 percent. Sophomore Dakota Shepherd came off the bench to finish with six points – including 4 of 4 from the charity line in the final minutes to keep the Cougars in striking distance. Shepherd also claimed five rebounds and blocked two shots.