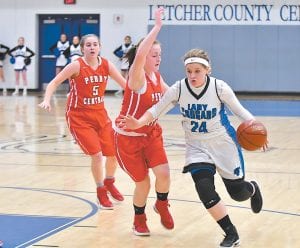 Letcher Central’s Shelby Hall dribbled around traffic on the way to the basket in Monday’s loss to Perry Central. LCC led by 13 points with just under five minutes to go in the game, but Perry Central rallied, going on an 18-3 run, and handing the Lady Cougars the 59-51 loss. (Photo by Chris Anderson)

With less than a month to go in regular-season play, the Letcher County Central Cougars entered this week’s action with a won-loss record of 12-6 after defeating the visiting Estill County Engineers last Saturday, 71-48.

The Cougars hosted Knott County Central on Tuesday night and will entertain the Jenkins Cavaliers on Friday before visiting Powell County on Saturday for a 3:30 p.m. game. Letcher Central will be at home again next Tuesday (January 31) for a tilt with the Harlan Green Dragons.

In last Saturday’s win over Estill, the Cougars were led by hotshooting senior Torell Carter, who racked up 25 points while hitting 11 of his 13 field goal attempts for an 84 percent average.

Also burning the nets was senior guard Austin Caudill, who was a perfect four for four from the field — including hitting on all three of his 3-point attempts — as he collected 11 points for the night.

The Letcher County Central Lady Cougars visit Breathitt County on Thursday night looking to end a two-game losing streak that comes after a stretch of good play that saw the team, 12-9 on the season, win five of six contests.

After their visit to Breathitt, the Lady Cougars will host Jenkins at 3:30 p.m. on Saturday, and then travel to Wise Central in Virginia for a Monday night game. Hazard is scheduled to visit Letcher Central on February 2.

Despite their 12-9 record, the Lady Cougars remain among the top tier of the 14th Region at this point in the season. They have one four of five district games and seven of 11 district matchups.

In the loss to Perry Central, the Lady Cougars were led in scoring by Shelby Hall and Emma Mag- had five points, and Cameron Kincer scored three points. Maggard led the team in rebounding with 16, followed by nine for Caudill.

As a team, Letcher Central entered play this week shooting 42.9 percent from the field while sporting three-point field goal average of 28.6 percent.