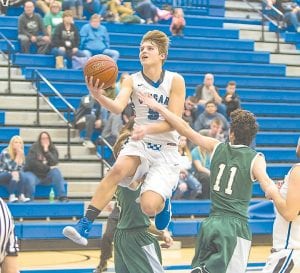 Letcher County Central’s Gregory Kincer drove for a layup during the Cougars’ 77-46 win over visiting Jenkins last Friday night. No. 11 for Jenkins is Payton Rose. (Photo by Chris Anderson)

The Letcher Central Cougars posted a 2-2 record last week to raise their overall mark to 6-16. The Cougars started the week with a 64-48 loss at home to Knott County Central on January 23. LCC then posted back-to-back wins at home over Buckhorn and Jenkins on January 24 and January 26, respectively, before losing 61-55 at home to Eastside (Va.) January 27.

The Eastside Spartans from Coeburn, Va., won their 10th straight game, 61-55, at Letcher Central January 27 to raise their record to 15-3.

Eastside led 11-10 after the first quarter and 27-23 at the half and then used a 6-0 run to close the third quarter for a commanding 46-33 lead heading into the final quarter.

The Cougars closed to within 51-47 on Greg Kincer’s basket midway of the fourth quarter and Elijah Raglin’s trey pulled the Cougars to within 56-52 with three minutes left. Kincer’s trey cut Eastside’s lead to 58-55 inside the last two minutes, but LCC missed a couple of shots from the floor and a couple of free throws at the end, allowing Eastside to hang on for the victory.

Luke Lawson led the Spartans with a game-high 21 points. He also chipped in with 11 rebounds and four blocked shots. Nick Livingston finished with 14 points.

Junior center Tyler Boggs had a huge night for the 6-16 Cougars — posting a double-double teamleading 17 points and 11 rebounds. He also had two blocked shots.

The Spartans out-rebounded the Cougars 40-35 and converted 22 of 51 field goal attempts for 43 percent while holding the Cougars to 16 of 50 shooting for 32 percent. The Cougars made 19 of 33 free throws while the Spartans made just 12 of 20.

Early Jenkins mistakes fueled a 10-2 run by the Cougars and LCC led 26-13 after the first quarter and 51-25 at the half. LCC extended its lead to 73-34 heading into the final quarter.

The host Letcher Central Cougars came from behind in the fourth quarter to edge the visiting Buckhorn Wildcats 57-53 January 24.

LCC led 7-5 at the end of the first quarter. A 20-6 run to open the second quarter allowed the Cougars to take a 26-15 at the break. The Wildcats, taking advantage of the Cougars’ mistakes, rallied after the break to take a 40-39 lead heading into the fourth quarter.

The Wildcats made 21 of 53 field goal attempts for 40 percent and pulled down 30 rebounds while limiting their turnovers to 11.

The Cougars shot 50 percent from the floor, making 22 of 44 attempts and 12 of 23 from the charity line. LCC claimed 35 rebounds but was guilty of 16 turnovers.

The visiting Knott Central Patriots pulled away in the second half to down the host Cougars 64-48 January 23 in a key district match-up for both teams. The Patriots remain unbeaten in the 53rd District while the Cougars fall to 1-3.

LCC led 13-12 at the end of the opening quarter. There were three lead changes early in the fourth quarter before the Patriots’ defense forced the Cougars in several turnovers that resulted in easy baskets. Isaac Caudill’s basket gave KCCHS a 23-21 lead midway of the quarter and the Patriots never relinquished the lead. KCCHS led 31-27 at the break and, again taking advantage of LCC mistakes, extended its lead to 48-35 after three quarters.

Khalil Slone led the Patriots with a game-high 19 points. Kolton Hofsess scored 15 points and Isaac Caudill chipped in with 14 points and six rebounds. Colby Napier wound up with 10 points.

KCCHS, now 14-4, made 23 of 44 field goal attempts for 52 percent and pulled down 28 rebounds while limiting its turnovers to eight.

LCC made 16 of 41 field goal attempts for 39 percent while making 15 turnovers. The Cougars claimed 24 rebounds and made 13 of 16 from the charity line.