LCC boys will be top-seeded 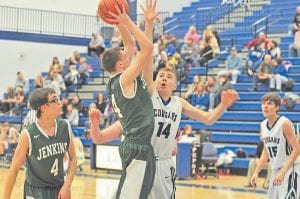 Jenkins freshman Chad Fleming went up for a shot against Letcher Central’s Trevor Hardin (14) in the Cougars’ 75-26 defeat of the Cavaliers. No. 15 for Letcher Central is Skylar Yonts. Wearing No. 4 for Jenkins is Matthew Jessey. (Photo by Chris Anderson)

For the first time since 2012, the Letcher Central High School Cougars are the regular season 53rd District champions.

The Cougars (15-5) earned the number one seed in the boys’ district tournament by defeating district rivals Knott Central and Jenkins last week.

The Cougars, who are unbeaten at 5-0 in district play, visit June Buchanan tomorrow night (Thursday), but the outcome of that game has no bearing on the Cougars’ top district seed.

June Buchanan, despite having the winningest record in the 14th Region at 16-6, will be the number two seed with a 3-2 mark in the district.

Cordia, which won the All “A” State Championship on January 31, is not eligible to compete in any of the KHSAA’s post-season tournaments this season.

The host Cougars used a stout defense and balanced scoring to down Powell County 80-54 January 30.

Junior guard Austin Banks, who led all scorers with 21 points, scored 14 of LCC’s first 21 points. He was 7/21 in field goal attempts — including 4/6 from behind the arc.

The Cougars’ defense set the tone early. LCC forced the Pirates into nine first-half turnovers, which the Cougars turned into 17 points the easy way. For the game, the Pirates were guilty of 17 turnovers while LCC made just 11, but only three in the second half.

Jordan Gregory, Colton Yonts and Jonathon Potter chipped in with two points each.

Host Letcher Central was able to rest All-Stater Torell Carter in its 75-26 win over Jenkins January 29.

The Cougars forced Jenkins into 30 turnovers, which accounted for 52 of their total points.

With 89 seconds left in a game that would decide whether or not Letcher Central would be the regular season 53rd District or would have to wait until its visit to June Buchanan on February 4, junior guard Austin nailed a trey after Knott Central had closed to within 50-44 and the Cougars never looked back.

Senior forward Tyler Collins was selected the Alice Lloyd College/ Hometown 24 Player of the Game based upon his double/ double of 16 points and 10 rebounds. Collins’s board work helped LCC outrebound the Patriots 39-24.

Torell Carter, who started slow, finished with 15 points and nine rebounds. Jordan Gregory chipped in with 13 points and five rebounds.

With 5:20 left in the game and LCC up 48-34, the Patriots stormed back to close to within 50-44 and appeared to have all the momentum on their side. Austin Caudill, who was 0/2 from behind the arc, hit the trey that stunned the Patriots and allowed LCCHS to catch its breath and go on for the victory. Caudill finished with just the three points, but they were the three biggest points of his young career.