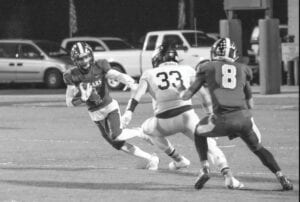 Letcher County Central’s Reece Barnett looked to shake off a defender in last Friday’s 24-7 win over Class 4A District 8 rival Harlan County. The Cougars trailed 7-0 at halftime, but dominated the second half to push the team’s record to 4-0. Also pictured is Letcher Central’s Sam Little (8). LCC is idle this week after a halt to organized sports was ordered after in COVID-19 cases here. (Photos by Chris Anderson)

Letcher County Central improved to 4-0 (2-0 in district) with a 24-7 victory over Harlan County Central. The Cougars scored 24 points unanswered in the second half, led by the tough running of quarterback Carson Adams. The Letcher County school system as of Monday has shut down all extracurricular activities due to COVID-19 rates in the county. It will look at the case rates every Thursday to determine when and if sports will resume.

Harlan County returned the opening kickoff to its own 36-yard line. The Black Bears went for it on fourth down and a sack by LCC defensive lineman Cooper Bailey forced a turnover on downs near midfield.

Jonah Little took a handoff on a sweep play for a 12-yard gain. The LCC offense couldn’t move the ball any farther and turned it over back to the Harlan County offense.

The Cougar defense held strong and after a punt LCC got the ball at its own 49-yard line.

Adams started the drive with a 22-yard gain on a quarterback draw. Two plays later Harlan County intercepted a pass in the corner of the end zone to stop the scoring threat. 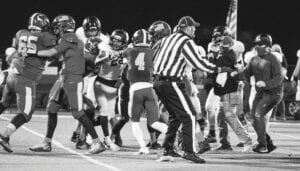 Letcher Central and Harlan County players tangled near the end of Friday’s matchup between the Class 4A District 8 rivals. Letcher Central had put the game away by the time the scuffle began when Patty Loveless’s version of the Darrell Scott song “You’ll Never Leave Harlan Alive” was played on the PA system at Cougar Field. After the fight was broken up, the game’s officiating crew signaled for the clock to run the final minute of the game without any players on the field. (Photo by Chris Anderson)

On third and long, the Black Bears gained 58 yards on a perfectly executed wide receiver screenplay to Tyler Flanary. On the next play running back Demarco Hopkins had 26-yard touchdown run. The extra point gave Harlan County a 7-0 lead with 3:38 left in the first quarter.

On third and 17, Adams dropped back to pass and scrambled for a 20-yard gain. A holding penalty derailed the drive and the LCC punt was blocked and came to rest at the Harlan County 41-yard line.

Quarterback pressures on consecutive plays by Cooper Bailey forced a turnover on downs after an 11-play drive into LCC territory.

The Letcher Central offense went three and out and was forced to punt.

Harlan Central got one first down but then three plays later went for it on fourth and short. The Black Bears ran a sweep play on which LCC defender Wyatt Ison did a great job fending off a pair of blockers and tackled the ball carrier one yard short of the line to gain to keep the score at 7-0 heading into halftime.

Letcher Central received the second half kickoff and Adams threw a perfect deep pass to receiver Alex Blair for a 46-yard gain. Adams would cap off the drive with a two-yard touchdown run on a quarterback sneak. The two-point conversion attempt was no good but LCC still cut the lead to 7-6 early in the third quarter.

The LCC defense forced a three and out.

On second and four, Adams had a seven-yard gain on a read-option keeper. The offense couldn’t move any farther and the punt was blocked for the second time and recovered by Harlan at the LCC 36-yard line.

The Black Bears went for it on fourth and five and a great reaction by LCC defensive back Koby Barnett who tackled the receiver as soon as he caught the ball just short of first down yardage for a key stop for the Cougar defense.

After punts by both teams, Adams had a nice cutback on a run for an 18-yard gain. Two plays later on same play call around the right side of the line, Adams had a nice 12-yard gain. Adams then ran up the middle for a six-yard touchdown to give the Cougars their first lead of the game 12-7 after the two-point attempt failed.

The LCC defense forced another punt that Sam Little returned just past midfield.

Adams, on the same sweep play as the previous drive, gained 17 yards. Three plays later on fourth and three, Adams completed a pass to Jonah Little on an out route and Little outran two defenders for a 25-yard touchdown to make it 18-7.

On the first HCC play, Kaden Barnett intercepted a pass and a holding penalty nullified the touchdown return but the Cougar offense still got the ball with great field position.

On fourth and nine, a great play call to run a reverse to Alex Blair netted a 29-yard gain. Running back Hayden Brashear scored a touchdown on a pitch from one yard out to make it 24-7 after the conversion failed.

On the ensuing kickoff a tussle occurred between some players and the coaches did a good job of coming onto the field to break up the altercation. After meeting with the officials it was decided to run the clock the rest of the game and end it so that nothing escalated.

Letcher Central made great halftime adjustments and dominated the second half to get its second district victory of the season. LCC outgained the Black Bears 333-207 in total yardage.

Keaton Day led the defense with nine tackles. Sam Little and Jackson Meade had seven tackles apiece. Kaden Barnett had six tackles and an interception. Cooper Bailey was in the backfield constantly and recorded a sack and tackle for a loss.

Letcher Central’s game this Friday against Clay County has been postponed because of the outbreak of COVID cases in the county. After a bye week October 16, LCC’s could resume play the next week against Johnson Central.